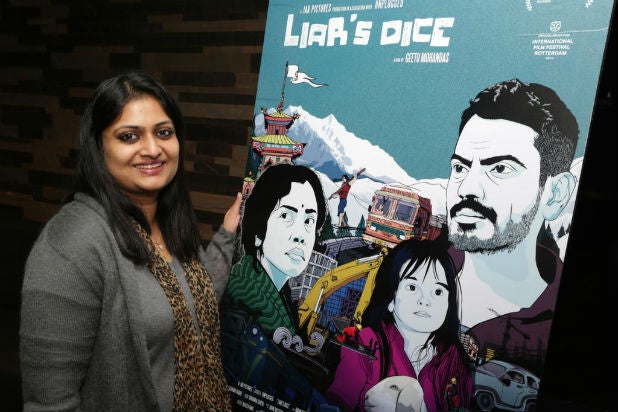 In India, not everyone says, “Hooray for Bollywood” — least of all the independent filmmakers who struggle to get dramatic films produced amid the glitz of India’s film industry.

“I couldn’t get this made because anytime I went to a top Bollywood production house, they said, ‘It’s interesting, but how am I gonna sell a woman, a kid, and a lamb on a mountain?'” revealed actress-turned-director Geetu Mohandas at TheWrap Award Season Series screening of “Liar’s Dice” Monday night.

She ignored the obvious answer, which would be to have the woman, kid and lamb singing and dancing, yet got “Liar’s Dice” independently financed anyway. In the end, there was sweet vindication, as her directorial debut came from behind the pack to be submitted by India as the nation’s official entry in the Oscars’ foreign language film race. Mohandas’ intimate road movie screened at the iPic in Westwood with Steve Pond leading a post-viewing Q&A.

“I was really overwhelmed” by India making it the official Oscars pick, said Mohandas, “because I was competing with the top 30 films from the nation. Some of them were huge Bollywood blockbusters.” The country’s entertainment media remained ignorant that “Liar’s Dice” even figured in as a contender. “Since they didn’t know that we were in the running, every time the press would announce ‘Here are the top five,’ we were no where in the picture,” Mohandas laughed. “Finally when it was announced, they were like, ‘Who? What?’… even though they knew we were in Sundance and knew about the press [from this year’s festival] … It was interesting because most of the studios that were competing with me had rejected this at the script level.”

Also read: TheWrap Screening Series: ‘Black or White’s’ Kevin Costner on Race Relations – ‘We Have to Move Past Our History’ (Video)

“Liar’s Dice” is a sort of quest film, following a young wife and her three-year-old daughter — and, for much of the way, yes, the girl’s pet lamb — as they depart from a remote mountain town and ultimately end up in urban Delhi, all in search of a husband who set off for a construction job and hasn’t been heard from in five months. Soon into the journey, they reluctantly join up with a mysterious, quietly cantankerous army deserter who promises to find the missing husband for cash advances and rewards, even while scoffing that the MIA spouse has probably abandoned the family to go tomcatting in the big city.

Mohandas was motivated to make the film not because she wanted to draw attention to cheating husbands, but because of a graver problem involving “migrant laborers and their plight and displacement” that ends up being subtly spotlighted in the drama.

“I wanted to tell this story because I think every citizen in India should be aware of the social system,” explained Mohandas. “In this day and age of globalization and materialism and the fast life, with instant gratification as the mantra of the nation, the poorer people come to the nation’s attention as a mere statistic when something happens to them … I didn’t want to make a film that was preachy, about the politics of the region, but I wanted to give that [missing] man a name and a family.”

The actor who plays the sometimes helpful deserter, Nawazuddin Siddiqui, is “a huge star in Bombay,” which did prove helpful in some regards, even though it might have set up expectations for a different kind of movie among some audiences. “I was very nervous when we had a [first] screening in India, because this whole Bollywood thing really stares in your face when you’re a small fish in a big ocean back there,” said the director. “So I was so excited that when the screening started, there wasn’t a single seat which was empty, and people were sitting on carpets and pouring in.

“I was like, wow, it’s for me! Then I realized, no, it’s for the star. But OK, whatever — I’m happy. It was nice, because the screening finished and people started talking and had questions and … I think they liked it. Of course there were some who didn’t as well, because it’s not something everybody should like.”

Before turning to the other side of the camera, Mohandas had a brief stint as a child actor and went on as an adult to do 40 films as a lead actress from from 19 to age 33, when she gave it up. “I think as an actress you take orders and as a filmmaker you give orders, and I kind of preferred that,” she revealed. “But on a serious note … As an actor you need to really be fit. I mean, there’s a lot of dedication that goes behind acting — you need to be disciplined, need to be on a diet, and it’s not just glitz and glamour. I’m not in that space.”

The space she is in involves a husband, Rajeev Ravi, who is also her cinematographer, and two-year-old daughter.