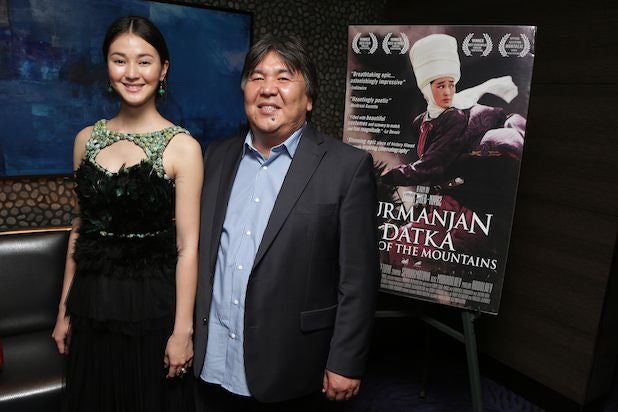 “This film was on top of the box office for weeks,” first-time filmmaker Sher-Niyaz told an audience at the iPic Theater in Los Angeles during TheWrap‘s Award Series screening on Thursday. “‘Interstellar’ can not beat my film. Only ‘The Hunger Games’ beat my film.”

The drama set mostly in the 19th century tells the rare story of its eponymous heroine rising through the ranks of power to lead and ultimately unite the Muslim country nestled in central Asia, just outside the Middle East.

Kurmanjan, whose face decorates currency in the country, broke social barriers at almost every turn throughout her 96 years of life: She successfully fled an arranged marriage, married a powerful feudal lord instead and was declared one herself after her husband was murdered.

The Datka is revered for her strength of character, as well sustaining a peaceful relationship with the Russian army that began to occupy the region in 1876. Most famously, she watched her own son get executed by the Russians for a crime he did not commit, in order to save Kyrgyz planning to revolt from being massacred.

Ultimately, Kurmanjan laid the foundation for the country’s independence in 1991, as well as its cultural acceptance of women — an unusual characteristic for any other Muslim country in the region — which is evident by the face that its first president was a woman.

“This woman is very, very well known in our country,” Sher-Niyaz said. “This is a very important part of our history, but during Soviet Union our history was distorted. Only after gaining our independence could we make a film like this that tells the truth.”

And the people of Kyrgyzstan could not wait to get the story out. Sher-Niyaz said 10,000 people participated in the two-and-a-half-year production that cost a minuscule $1.5 million. Half of those people worked for free.

“This film is the first historic film about Kyrgzstan since its independence,” Sher-Niyaz explained. “This film was very important to the people in the country.”

It appeared to be important to the audience that packed the theater to see the film, too. Applause was regularly given to the filmmaker and his star, Elina Abai Kyzy, who portrayed Kurmanjan from the ages of 18 to 25.

“It’s a very touching moment for me. It’s kind of a fairy tale that this hall is packed,” Kyzy said. “This role is a great, great responsibility.”

When discussing the prominent role of women in Kyrgyzstan, a Republic with a parliament made up of 30 percent female members, Kyzy offered this proverb: “Men rise the sun, and women rise a nation.”

“That is why the wisdom and character of women is very important,” Kyzy added. “It’s a shame that there is still discrimination of women in parts of our world.”