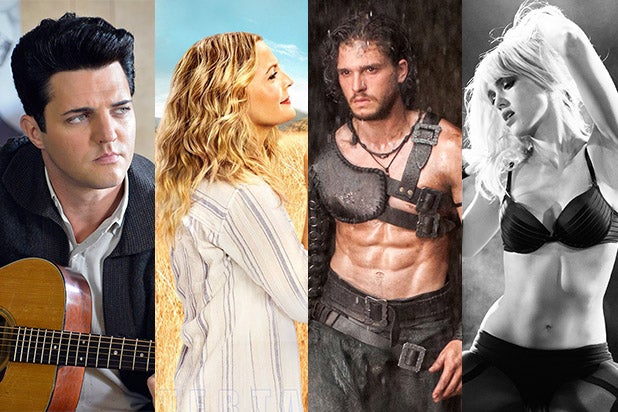 For every year that is packed with awards season fodder and memorable movies that will go down in history, there is an equal number of films we wish we could erase from our memories.

The Worst of 2014 includes both people who should know better and repeat offenders, artists with a vision and hucksters out for a quick buck.

Here’s hoping the responsible parties resolve to do better in 2015.

Below, TheWrap‘s Reviews Editor Alonso Duralde, and reviewers Inkoo Kang and James Rocchi present their worst films of the year.

I’d like to make a personal plea to the Golden Raspberry Awards: Every year, so many terrible movies escape your jaundiced eye, because certain films – and certain performers – get so much attention from you that you don’t spread the wealth nearly as much as you should.

Seriously, folks, I had to cull dozens and dozens of duds to come up with a Top 10 list, so surely the Razzies can figure out a way to give Adam Sandler’s latest just, say, four or five nominations rather than 10. So much awful work awaits your non-acclaim. Let’s give everyone who deserves it a moment in the spotlight of shame.

10. “Blended”: Oh look, it’s Adam Sandler. And while this family comedy might have been a tad less wretched than recent efforts like “Grown-Ups 2” and “That’s My Boy,” it still has all the product placement and straight-white-male-privilege his dwindling fanbase has come to expect.

9. “I, Frankenstein”: Angels battle demons in one of the ugliest and emptiest CGI cities ever captured on film, dropping Aaron Eckhart’s listless animated corpse down to sixth or seventh on the list of the movie’s major problems.

8. “Pompeii”: You’ll be rooting for the lava in this pasteboard production, although Kiefer Sutherland’s sneering overacting does occasionally rouse this movie from its general torpor.

7. “Tyler Perry’s Single Moms Club”: So tone-deaf in its portrayal of contemporary women and their problems that one wonders if Mr. Perry has ever met a single mom in his life. Paging Madea.

6. “A Haunted House 2”: A witless and offensive comedy spawns a sequel that manages to be even lazier and more idiotic. Burn the house, and this franchise, down to the ground.

5. “Transcendence”: Master cinematographer Wally Pfister’s directorial debut was one of the year’s most thudding “keep your day job” moments, as Johnny Depp becomes one with the Internet in a pointless and overwrought thriller.

4. “Gambit”: How bad could a movie starring Colin Firth and Cameron Diaz and written by the Coen Brothers possibly be? Trust me, you don’t want to know, and the fact that you probably don’t even know this long-shelved movie exists speaks volumes about the pride its makers have for it.

3. “Sin City: A Dame to Kill For”: Those special effects that seemed so groundbreaking in 2005 don’t pack the same punch anymore, and sadly, this sequel didn’t bring anything new to the bloodbath.

2. “Atlas Shrugged: Who Is John Galt?”: There is hope for bipartisanship — objectivists and progressives alike could agree that this shoddy, amateurish closer to the Ayn Rand trilogy was an utter embarrassment.

1. “The Identical”: The faith-based community gave us plenty of bizarre cinematic objects this year (“Left Behind,” “Kirk Cameron’s Saving Christmas”) but nothing as whacked-out as this sort-of Elvis movie that’s really a stealth advertisement for converting Jews to Christianity with the power of rock and roll. Or something. The only stinker of 2014 that deserves to live on as a midnight staple.

Inkoo Kang
Nearly 900 theatrical features were released last year, and probably a comparable number in 2014. By definition, half of them were below average — and a lot of them were just straight-up bad. Here are the memorable stinkers of the year, the ones that remind us that making movies is hard — and should be hard for a reason.

10. “Bad Words”: Jason Bateman’s directorial debut stands out from this year’s crop of R-rated comedies for all the wrong reasons — its laziness, its acridity, and, as when the filmmaker-star is hurling racial insults at an Indian-American kid, its flop-sweaty desperation to offend.

9. “Moms’ Night Out”: Of all the lackluster-to-abysmal Christian movies that debuted in 2014, this thoroughly unfunny comedy was the worst sinner of the bunch for hiding its faith-based agenda while suggesting that wives should be subservient to their husbands.

8. “The Girl and Death”: About as appealing as a cobwebbed bloomer, this musty romanticization of old-timey sex work belongs in a museum exhibition called “Wait, Why Did We Think Tuberculosis Was So Romantic?”

7. “Meet the Mormons”: This expansion of the “I Am Mormon” campaign is too timid to explain even the most basic tenets of the LDS faith. Am I a Mormon? I have no idea!

5 & 6. “Maladies”/”Colors of Time”: James Franco is a phenomenally talented and tireless actor whose off-the-cuff, little-thought-through collaborations with friends not named Seth Rogen should probably be exhibited only in his living room.

4. “Nymphomaniac Vol. 2”: “Volume 1” was a thoughtful, funny, even relatable romp. “Volume 2” was just more of the same, but with Lars von Trier spitting in the eye of humanity because he’s, like, so edgy, man.

3. “Tanzania: A Journey Within”: A vacation video stitched into a documentary about finding the real, “primitive” Africa from the perspective of an astoundingly clueless tourist, this infuriating film mistakenly assumes that its viewers are as naïve and as ill-informed as its main character.

2. “God Help the Girl”: Aggressively twee and unsatisfyingly flighty, Belle and Sebastian frontman Stuart Murdoch denies us the best thing he has to offer until after the movie’s over: his voice. Instead, this hipster musical is an offensively flippant treatment of anorexia and a viscously paced collection of forgettable tunes.

1. “The Disappearance of Eleanor Rigby: Her/Him/Them”: A cynical folly from conception to execution, the year’s worst film — a trio of them, actually — are three different drafts of a highly derivative screenplay that wasn’t very good to begin with. Despite excellent performances by Jessica Chastain and especially Viola Davis, it’s the height of arrogance to ask viewers to watch the film’s central mopey, absolutely nondescript pair to go through their prolonged breakup not once, not twice, but three times.

James Rocchi
The contrast seems cruel; after a ridiculous number of great films in 2014, we still had to deal with depressing low points — soulless sequels, brainless “science fiction,” unfunny comedies and would-be deep dramas that play like After-School Specials that have overdosed on Quaaludes dipped in pretension. It’d be one thing to rail at these movies for their errors and mistakes, but please bear in mind that these films represent millions — indeed, billions — of production dollars that could have been better-spent on almost any other movie. While Steven Soderbergh goes to TV for money and freedom and John Sayles goes to Kickstarter, we’re still handing money and power in truckloads over to directors like Michael Bay to make toy stories.

10. “300: Rise of An Empire”/ “Frank Miller’s Sin City: A Dame to Kill For”: Two unnecessary sequels, delivered years past any point where the effort would mean anything, both of which spring from the mind of comics artist Frank Miller. I have happy childhood memories of Miller’s ’80s comics work; these days, watching his films is like taking a glass-bottom boat ride through the sexist, blood-spattered sewer of his mind. And don’t tell me Eva Green is “great” in either of them; it takes very little to be a fleck of brightness against the dung-colored darkness of these two monstrosities.

9. “Transcendence”: What was almost the worst science-fiction film of the year — director Wally Pfister should send a thank-you card to his old boss Christopher Nolan — with Johnny Depp playing Johnny Depp in a slow, suspense-free film that turned an interesting philosophical idea into an inert mass of dull exposition and duller explosions.

8. “A Million Ways To Die In The West”: It may be time for Seth MacFarlane to recognize that he’s the post-millennium Madonna — a talented, loved, and charming creator who nonetheless cannot seem to get a drop of all that ability and charm to make its way through the lens of a movie camera to be captured on film. This loosely-typed Western comedy was supposed to be a hit; instead, we got “Lazing Saddles,” all bluntness with no bite.

7. “St. Vincent”: A half-rotted marshmallow masquerading as gritty drama, even Bill Murray’s charm couldn’t save this mawkish, phony story of a reprobate (Murray) who learns and grows by taking care of a neighbor kid (Jaeden Lieberher) so precocious and clever he seems more like a grown-up struck by a shrink ray. Add in Naomi Watts as a pregnant Russian sex worker with a Yakov Smirnoff accent, and you get a movie less fit for canonization than it is for being shot out of a cannon.

6. “Jersey Boys”: When I think of the energy and power of early doo-wop music, I think Clint Eastwood! Oh, no — I don’t, and nobody else does, either. In “Pulp Fiction,” the novelty nightclub Jackrabbit Slim’s is described as “A wax museum with a pulse”; “Jersey Boys” is a wax museum without any sign of life.

5. “Transformers: Age of Extinction”: Never mind the bloated bombast and the bad script: This is a film where Michael Bay took production money from the Chinese Government — which doesn’t allow its citizens freedom, self-expression or self-determination — to make a movie about talking truck-robots who want freedom, self-expression and self-determination. The irony would be funny, if it weren’t as disgusting as it is mercenary.

4. “Men, Women and Children”: Jason Reitman’s dour, overdone age-of-computers relationship drama was ripped from the headlines — if those headlines were from a Reader’s Digest in 2002. A feature-length stumble towards the fainting couch, it’s Reitman’s worst film by any measuring method.

3. “The Amazing Spider-Man 2”: As expensive as they are unnecessary, Sony’s Spider-Man films now seem like nothing more than clammy-handed efforts to hang on to the rights so that Marvel can’t get them back and make far, far better movies with them — a inter-studio slap-fight that’s bad for all parties involved, from the moviemakers to the audience.

2. “America: Imagine the World Without Her”: A clumsy piece of conservative agit-prop by writer, pundit and convicted felon Dinesh D’Souza, this flag-waving, liberal-bashing screed is badly edited, sound-mixed like it was recorded on a walkie-talkie and so inept it doesn’t even count as preaching to the choir — just howling low-information hyper-conservative talking point noise at high volume to bask in the idiotic echo it makes.

1. “Interstellar”: All those who said Christopher Nolan needed to lighten up and show a little heart have a lot to apologize for; with “Interstellar,” Nolan’s usual frosty brilliance got melted into sentimental mush, resulting in a $150-million-plus version of “Field of Dreams” with bad science and worse fiction. “Maybe love, like gravity, can transcend time and space,” Matthew McConaughey sighs in this film’s sappy script, but no amount of love or special effects can give any gravity to this expensive IMAX Hallmark card.