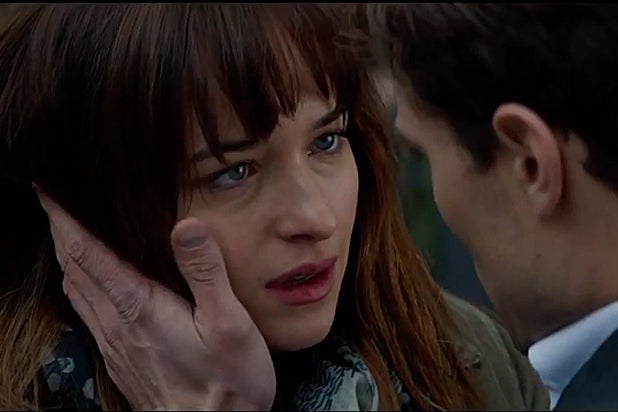 Social media is abuzz with strong opinions on “Fifty Shades of Grey’s” first look trailer, which was released Thursday. TheWrap has some thoughts of its own.

The response were playful, though news editor Todd Cunningham does try to inject some insight into Universal’s potential marketing strategy: “The trailer is focused far more on the set up and romantic dynamic than the sex. That may make sense… but it’s a delicate balancing act that will leave audiences very disappointed if it isn’t managed just right.”

Tony Maglio, TV Reporter
“Shocker — I know — but I haven’t read the book. To be fair, I don’t quite think I’m the target demo for the novel or its film adaptation. That said, I found the trailer quite melodramatic, right from the very first title card through the last. Also, I’m a journalist, but this never happened to me on any interview. But I digress. The casting seems solid, budget is clearly there and I’m glad Jax (Charlie Hunnam) bowed out. That’s probably going to work out well for everybody. This is either going to be the most awkward first-date movie of all time, or the one that pays the greatest dividends.”

Jeff Sneider, Film Reporter
“Jamie Dornan is smoldering. Dakota Johnson is perfection. They both take a backseat to Beyonce. And yes, I will watch that trailer 68 more times before Valentine’s Day.”

Todd Cunningham, News Editor
“The trailer is focused far more on the set up and romantic dynamic than the sex. That may make sense, as Universal aims to build buzz and we’re still seven months out from the movie’s release, but it’s a delicate balancing act that will leave audiences very disappointed if it isn’t managed just right.”

Jordan Zakarin, Film Reporter
“A few things worry me about this movie, now that I’ve seen the trailer. First, there’s not any sex, which makes me wonder if they know why people like the books. Second, why does Dakota Johnson think she’s boring? She has very famous parents and has been in a number of television shows. Third, is that plane safe? Fourth, I get a bit of a rape-y vibe from the ab dude. And fifth, did she ever end up writing the article? If so, does she disclose their relationship in the story?”

See video: ‘Fifty Shades of Grey’ Star Dakota Johnson Does Not Want Her Parents to See the Movie ‘At All’

Tim Molloy, TV Editor
“I can barely muster the interest to type that I don’t give a fuck about this.”

Travis Reilly, Blogger/Reporter
“The trailer is boring, banal, and wholly unerotic. Does anyone know whether ArcLight Cinemas will let me bring a ball-gag?”

Carly Milne, News Editor
“It certainly looks great, has heat factor and Beyonce’s sultry version of ‘Crazy in Love’ doesn’t hurt … but it still has the potential to go really wrong, really fast. No matter. Whether it’s the dawning of a new era of sexy cinema or the next ‘Showgirls,’ I’m in.”