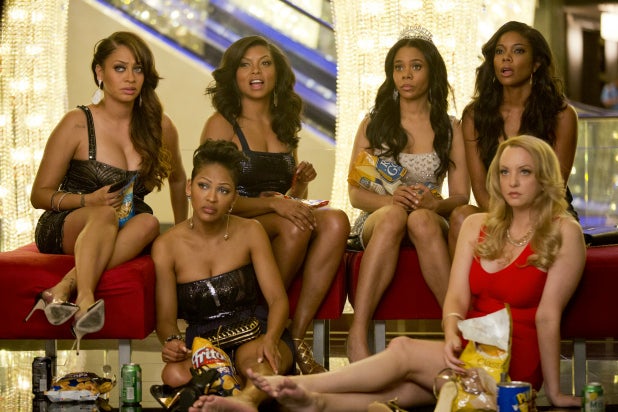 Say what you will about “Showgirls,” at least that unjustly maligned film acknowledged that Las Vegas has a seedy underbelly.

You’d never know that from “Think Like a Man Too,” which opens by describing Sin City as “Disneyland for adults” before devoting most of its running time to loving shots of blackjack tables at Planet Hollywood, glitzy villas and cabanas at Caesars (the $40,000-a-night “Constantine Suite” alone gets name-checked about two dozen times), and the fountains at the Bellagio.

See video: Kevin Hart Leads Battle of the Sexes Through Las Vegas in ‘Think Like a Man Too’ Trailer (Video)

I mention all this pro-Vegas propaganda because this sequel to the amusing 2012 sleeper hit spends so much time trying to sell audiences on a vacation to Nevada that it can barely devote any attention to its dozen or so major characters — all of whom have descended on the resort town for the marriage of Candace (Regina Hall) and Michael (Terrence Jenkins).

Unlike “How to Train Your Dragon 2,” which gives us characters older, wiser, and more experienced than they were in the previous movie, “Too” pretty much reprises all the conflicts from last time: Candace still thinks Michael is too attached to his mommy, Miss Loretta (the great Jenifer Lewis); Mya (Meagan Good) hasn’t gotten over the playboy past of Zeke (Romany Malco); conflicting career issues continue to vex the relationship between high-powered exec Lauren (Taraji P. Henson) and chef Dominic (Michael Ealy); and now that Kristen (Gabrielle Union) has tamed man-child Jeremy (Jerry Ferrara) into marriage, she wants a baby.

And then there’s Cedric (Kevin Hart), once again separated from his wife Gail (Wendy Williams), who has taken his title of best man (which he unwittingly intercepted from Dominic) way too seriously — organizing the bachelor party to end all bachelor parties in the aforementioned Constantine Villa.

(Hart also narrates in a relentlessly screechy voice that suggests that director Tim Story recorded the comedian backstage at a loud concert, where he was struggling to be heard.)

As with the first movie, the conflicts (as created by returning screenwriters Keith Merryman and David A. Newman) aren’t nearly as interesting as the actors who are all working overtime to elevate the material. (Well, except for Terrence Jenkins; the E! host is clearly out of his depth here.) The good news is that Steve Harvey’s dating manual “Act Like a Lady, Think Like a Man” is no longer being cited every five minutes; the bad news is that the ensemble barely has time to do or say anything amidst all the Las! Vegas! Glitz!

Since the principals are stuck with all the tedious plotting and exposition, it gives ample opportunities for the second bananas to steal scene after scene, whether it’s Wendi McClendon-Covey as a buttoned-up housewife who gets a hot-tomato makeover or Dennis Haysbert as Candace’s Uncle Eddie, who provides a suave distraction for Miss Loretta, complete with hilarious slow-jam accompaniment (from scorer Christopher Lennertz).

And in a stroke of fortuitous timing, there’s a funny running gag about going to see “Jersey Boys,” all the more fitting since Clint Eastwood‘s big-screen adaptation of the hit musical is this movie’s main opening-weekend competition.

There are moments of fun to be found in “Think Like a Man Too,” particularly a bachelorette party lip-sync that will be feebly imitated by drunk girls for years to come. It’s just a pity that the movie does better by members of the Las Vegas Convention & Visitors Authority than those of the Screen Actors Guild.