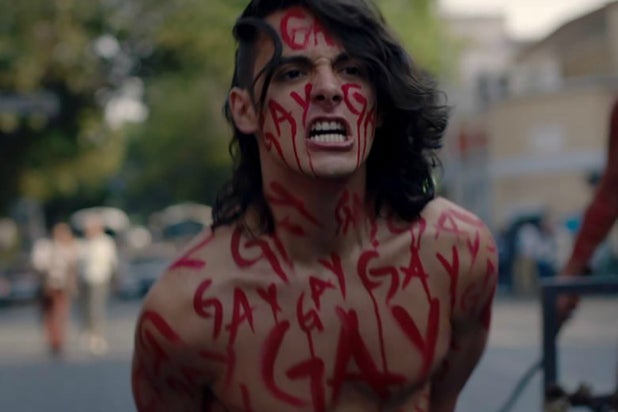 Hari Sama’s “This Is Not Berlin” is a memory movie set in the art world and punk scene of Mexico City circa 1986, a world that is packed with visual detail and moments that are trapped in time by the camera.

The film moves very fast and takes in as much of this world as possible for us, offering it up both lovingly and satirically. There are many characters, but somehow what stands out are shots of Tabasco sauce poured on eggs, a cartoon program playing on a television set and smoke drifting in the air from cigarettes.

In one charged and lyrical scene here, best friends Carlos (Xabiani Ponce de León) and Gera (José Antonio Toledano) are seen from above smoking cigarettes together, with a paper cup framed in back of them so that we can see the cigarette butts that have been discarded. Their faces are open to the pleasure of the moment, and there is something very intimate about the energy between them. The magic of this short scene is something that can’t quite be verbalized, but can be experienced visually.

At one point early in “This Is Not Berlin,” Carlos and Gera are running between houses, and the camera follows them as they go inside a door, but then it pans up and stares for a few moments at the cloudy sky. Why does the camera do this? There’s no clear reason for it. It just feels like Sama wants to take in as much of this milieu as possible, even when his plentiful and very active characters are no longer in the frame.

Carlos has a kind of androgynous beauty that makes him look out of place in the first scene, where we see a fistfight between his schoolmates and guys from another school in slow motion. In these initial shots standing amidst this fight, he looks like a budding aesthete, bored to death by such uncomplicated destructive male energy. We see him staring, and there is a cut to a kind of blur ahead of him, and then Carlos faints, as if his body wants to take him out of this brawl and this location.

Carlos is secretly in love with Gera’s sister Rita (Ximena Romo), a girl who reads Patti Smith poems in school and is comically quick to take offense. After she sings and recites in a very Patti Smith-like way at a club called the Aztec, Carlos goes up to congratulate her; Rita tells him she’s glad he “got it,” and Sama has some fun with how full of herself she is. His touch here is so sure that his characters can behave in absurd or bad ways and they are still somehow likable and very attractive, and the same can be said for the way he looks at the world of the Aztec, which is run by a gay artist named Nico (Mauro Sanchez Navarro), who does naked performance art in his loft upstairs.

Nico falls instantly in love with Carlos when he sees him helping out for one of Rita’s performances where she keeps shouting, “Sexual promiscuity! Sexual promiscuity!” In true bohemian fashion, Nico tells Carlos that “exclusivity is bullshit,” but he pursues Carlos steadily, and Carlos experiments with his looks and with his sexuality because Nico and his club represent everything that is fun and hip to him.

It’s easier to write about a social environment like the one shown in “This Is Not Berlin” than to film it, because club scenes are so difficult to get right on screen, especially if they are supposed to be taking place more than 30 years ago. There never seem to be enough people doing enough of the right things for party set-pieces like this on film, and so Sama chooses to not linger too long over anything at the club, focusing instead on Nico’s art happenings outside, which are often just as silly as Rita’s performances on stage.

Sama films art-world arguments (“We’re Jungian, dude!”) with affection and just the right amount of mockery, but he falters a bit in the scenes that Carlos has with his family members, which don’t feel as vital or lived-in as the scenes with his young friends. What’s lovely about the best scenes in “This Is Not Berlin” is the sense Sama captures of all the possibilities opening up for Carlos, so that he might finally kiss Rita or he might kiss Nico or he might join a band or make art or sleep with another girl he has his eye on, because Carlos is 17 years old and the world is at his feet. What makes this film so enjoyable is that it so often makes you feel the way he feels.