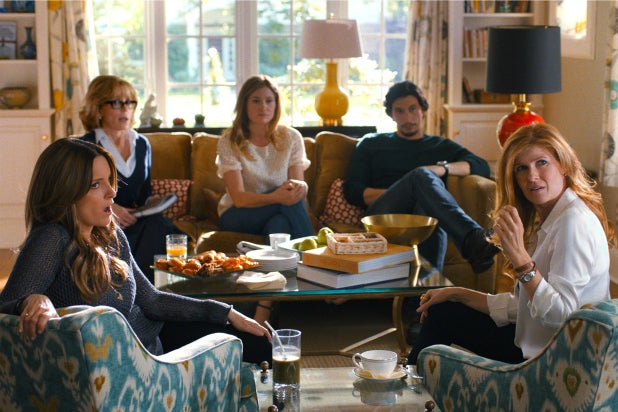 If Hollywood movies are any sort of reliable indicator then every form of familial drama can be overcome over the course of a long holiday. If you and your family are at odds for any reason, and you have spent decades fostering an unhealthy but persistent streak of resentment, all you need to do is alternate public, weepy confessions with bouts of wry, overwritten, self-deprecating humor.

It also helps if you have an affair or ingest illegal drugs. Also, be very wealthy. Follow these rules, and any history of abuse, neglect, infidelity, divorce and even – in the specific case of Shawn Levy‘s painfully bland “This Is Where I Leave You” – mental illness will all be magically erased in a trifling puff of gooey feel-good emotions.

See video: Tina Fey Sucker Punches Dax Shepard in ‘This Is Where I Leave You’ Trailer (Video)

This dramedy, premiering at the Toronto International Film Festival, offers family angst lite, with marital infidelity served up as the most grievous sin committed by any of the characters in it: Jason Bateman‘s recently divorced sad sack; Tina Fey’s fussy, unhappily married sister; Jane Fonda’s mouthy mom; and Adam Driver’s irresponsible lout, to name but a few.

Judd Altman (Bateman) catches his wife in bed with another man on the day his father dies. Papa Altman’s dying wish was for his family to sit shiva, although his ties to Judaism were sketchy at best. Gathering at their old, large Connecticut home for the seven-day task is the entire Altman clan, including Wendy (Fey), mom (Fonda), caddish younger brother Phillip (Driver), responsible brother Paul (Corey Stoll), and a corresponding romantic interest for each of them (including Rose Byrne, Debra Monk, Kathryn Hahn, Connie Britton, and Timothy Olyphant).

Wendy and Judd both find themselves reconnecting with old potential romantic mates from their respective pasts, and it’s not long before they, and just about everyone else, is toying with cathartic bouts of infidelity.

There’s so much cheating and potential cheating going on in this film, you’d think either Neil LaBute and Woody Allen contributed to its making. If only they had; at least then the humor would have had an edge, the angst might contain darkness, and the characters could exist within some sort of rich, hateful dynamic.

As it is, there is a lot of vague dialogue (written by Jonathan Tropper, based on his novel) devoted to the unclear lingering resentment the lead characters all carry for the recently deceased patriarch. They talk about how they miss their dad, but also complain that he was distant. That he was unsentimental, but clearly loving. Beyond a few hazy recollections, sadly, we get no definite portrait of the dead man’s actual character.

Each of the leads halfheartedly pins his or her own personal neuroses and character flaws on said emotionally distant upbringing (“I was always afraid to take chances!” “I have always been an irresponsible jerk!”), but when they’ve all finally said their piece, and are settling down after the whirlwind of their constant personal dramas, we get the sense that these adult children’s resentment for their father seem

s misplaced, their neuroses not all that pronounced after all. Indeed, these well-off bourgeois white people don’t seem to have ever been in a particularly bad place.

This not-very-bad-place turns out to be a wan destination for a movie ostensibly all about emotional baggage. “This Is Where I Leave You” ultimately spends it entire running time unpacking empty suitcases.

The excellent cast of “This Is Where I Leave You” cannot be faulted; all talented performers, they collectively make a constant effort to bring some sort of life to the limp script and uninspired direction. Rose Byrne, perhaps one of the funniest actresses currently working, does the best job of managing to elicit some sparkle from her character. Bateman, Fey, and Fonda all play versions of roles they’ve tackled before, which is something of a pity. Can’t the great Jane Fonda — unfortunately entrenched in a recent past riddled with the likes of “Monster-In-Law” and “Peace, Love & Misunderstanding” — get big-screen offers beyond wisecracking, oversexed grandmas anymore?

The film’s listless mediocrity bears the trademark of artistry-free auteur Shawn Levy, a Hollywood jouneyman if ever there was one. (He previously directed blank comedies like “The Internship,” “Just Married,” and the “Pink Panther” remakes.) Levy is the kind of director who can’t not play it safe, even when working with a better class of material.

Occasionally, Hollywood will step forward with a family drama that actually manages to tinker with actual pain (“Rachel Getting Married” comes to mind) or at least lend an edge of darkness to a grim situation (“August: Osage County”). “This Is Where I Leave You” has no edge, no darkness, no texture, no character to speak of. You’ll giggle a few times, maybe get a little wistful, but the theater door is where you’ll leave it.