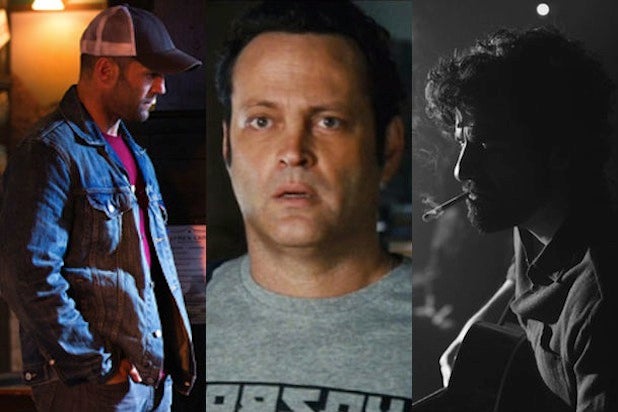 Were studio distribution heads mistakenly told to beware the Ides of November?

For no good reason, November 15th is a release date in search of a movie — as well as prime real estate on the awards-season calendar.

Now that Paramount has officially moved Martin Scorsese’s “The Wolf of Wall Street” to Christmas Day, the only wide release scheduled is Universal’s “The Best Man Holiday,” a sequel aimed at urban audiences that comes 14 years after the original grossed $34 million at the domestic box office.

So why doesn’t some smart studio take advantage and fill the wide release void by jumping into the pre-Thanksgiving fray?

Naturally, all of Hollywood is terrified of being sandwiched between Marvel’s “Thor: The Dark World” on Nov. 8 and Lionsgate’s “The Hunger Games: Catching Fire” on Nov. 22. “Thor” is expected to gross at least $80 million its opening weekend, while “Catching Fire” will likely double that mighty haul, and could soar as high as $185 million.

But there’s still a unique opportunity for a studio willing to take the risk. Here are some suggestions:

>> Disney/DreamWorks — The heartfelt Vince Vaughn comedy “Delivery Man” is being positioned as counter-programming to “The Hunger Games” sequel, but wouldn’t it stand a better chance opening Nov. 15? At the very least, the studio could arrange nationwide sneak previews of the heartwarming family film, which garnered both laughs and tears at Sunday night’s premiere.

>> Relativity and CBS Films — These two studios are opening “Out of the Furnace” and “Inside Llewyn Davis,” respectively, on Dec. 6. “Furnace” is opening wide, while the folk songs of “Davis” will be played in select theaters. “Furnace” could use the heat it’ll surely generate from its AFI Fest premiere on Saturday night to fire up audiences across the country, while a new Coen brothers movie could provide the perfect antidote to November’s blockbuster blues.

>> The Weinstein Company — Harvey Weinstein has always been an innovative mind who loves a good fight and isn’t afraid to think outside the box. What if TWC decided to free “Mandela: Long Walk to Freedom” a month early, or re-release “Lee Daniels’ The Butler” and “Fruitvale Station” as a double-bill? Who could resist that? The company would also be wise to move up “August: Osage County” and avoid the Christmas crunch.

>> Open Road Films — Its Jason Statham-James Franco action movie “Homefront” is going up against Disney’s animated musical “Frozen” and Spike Lee‘s “Oldboy” remake on Nov. 27. The Wednesday before Thanksgiving is one of the busiest travel days of the year. Why not move up a couple weeks and separate itself from the herd?

>> Paramount — Couldn’t the studio open Jason Reitman’s “Labor Day” on Nov. 15 to avoid the year-end pile-up? After all, Paramount is releasing “Anchorman 2” on Dec. 20 and “Wolf of Wall Street” on Dec. 25. It would reduce pressure on its own staff by not opening three movies in a span of six days and probably ensure a bigger audience for the Kate Winslet-Josh Brolin drama.

>> Universal/Focus — “The Best Man Holiday” is a Universal release, so the studio isn’t looking to jeopardize a strong opening. But what if it decided to get greedy? Would it hurt to test the waters with a one-night-only screening of “Lone Survivor” to drum up interest in advance of its Dec. 27 bow. It’s a great movie that will have some stiff competition after Christmas. Focus’ under-seen crime drama “The Place Beyond the Pines” might also benefit from a one-weekend re-release to remind audiences and awards voters that it was an early 2013 standout.

The cold, hard truth of the matter is that there are more than 10 solid movies opening between Dec. 25 and Dec. 27 this year. Something is bound to get lost in the shuffle — just like last year, when audiences rushed to see “Django Unchained” and “Les Miserables,” leaving worthwhile films like “This Is 40,” “Jack Reacher,” “Promised Land,” “The Impossible” and “Not Fade Away” in the dust.

The intricacies of distribution are tricky, but November 15th seems like an opportunity waiting for someone to knock. If “Breaking Bad” taught movie studios anything, it’s to be the one who knocks.