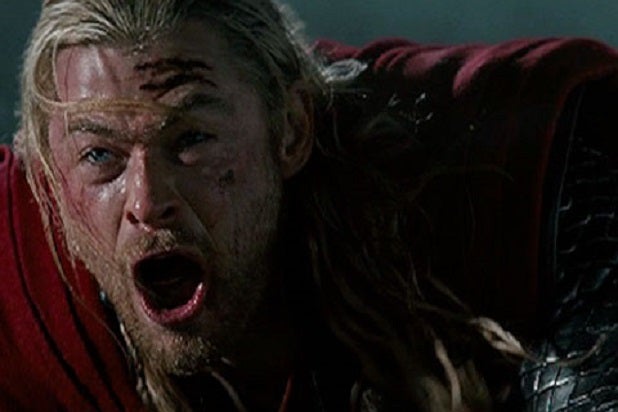 “Thor: The Dark World” is heading for box-office Valhalla, and it’s taking the global route.

That Disney’s Marvel superhero sequel will out-gross the original film, both domestically and abroad, looks like a given at this point — the only question is by how much. By Friday, it will be playing in more than 3,800 theaters in the United States and every major foreign market except Japan, Italy and Argentina.

“We’re looking forward to this,” Disney’s head of distribution Dave Hollis told TheWrap before Monday night’s Hollywood premiere. “The tracking is strong and has been consistent, the reviews have been great (84 percent positive on Rotten Tomatoes) and the reception has been terrific wherever we’ve shown it.”

Here’s where all that confidence comes from:

“The Avengers” Effect
“Thor” made $450 million worldwide in 2011, with nearly 60 percent of that coming from abroad. But that was before “The Avengers,” and the success of that 2012 blockbuster changed the game for all that will follow in Disney and Marvel’s cinematic universe. “Iron Man 3” nearly doubled the global haul of its pre-“Avengers” predecessor with $1.2 billion earlier this year. It played more like a sequel to the Marvel superhero mash-up than “Iron Man 2,” and “Dark World” is expected to do the same.

Chris Hemsworth and “Thor: The Dark World” likely won’t match the numbers put up by Robert Downey’s Tony Stark, but projections call for a U.S. opening north of $85 million. Analysts are convinced it will exceed the $180 million domestic total of “Thor,” which opened to $65 million, and could go as high as $650 million worldwide. The studio has done all it can to tie “Dark World” to the No. 3 all-time box office earner (behind “Avatar” and “Titanic”), plastering its ads with the catch phrase “Return of an Avenger.”

The World, Particularly China, is Bigger Now
In its first five days of release abroad, “The Dark World” has taken in more than $110 million – roughly 40 percent of what “Thor” grossed during its entire foreign run. Superhero sequels typically do better than originals overseas, but there are other factors. The explosive growth of the overseas market over the past two years, especially in China and Russia, changes the equation.

Also read: Chinese Box Office Will Leap 25% This Year to Pass $3.6B

“The Dark World” opens Thursday in Russia and Friday in China, day-and-date with the U.S., and its opening weekend could top the $15 million that “Thor” managed overall there. “The Avengers” made $85 million in China and “Iron Man 3” brought in $125 million earlier this year. The success of those two films bodes extremely well for “The Dark World.”

The Feige Factor
Marvel Production President Kevin Feige has masterminded the carefully calibrated rollouts of the superhero stable, and he’s getting pretty good at it. Marvel movies have taken in more than $8 billion at the box office.

“The Avengers” set up the success of “Iron Man 3,” which is going to provide a boost for “The Dark World.” If it delivers as expected, the “Thor” sequel will mean more momentum for “Captain America: The Winter Soldier,” which is set for April. Four months later, it will be “Guardians of the Galaxy.” And in May 2015, “The Avengers: Age of Ultron” will complete what Feige calls Phase 2 of the Marvel Cinematic Universe.

“Kevin and his team have built an incredible brand that’s been consistent and expanded it,” said Hollis. He’s also overseen the the cross-pollination of the Marvel story lines and stars.  In “The Dark World” for example,  Loki (Tom Hiddleston), the villain and the Thunder god’s bad bro  in “The Avengers,” joins forces with Thor to save the Nine Realms.

The Stars Are Brighter
Chris Hemsworth was hardly a household name when “Thor” debuted two years ago. Since then he’s appeared in “Snow White and the Huntsman,” “The Cabin in the Woods,” Red Dawn” and “Rush” – and “The Avengers.” Natalie Portman, who plays the Norse god’s love interest, hasn’t done much since. But Hiddleston’s star is on very much on the rise and the 32-year-old Brit has been embraced by the franchise’s fans.

“He’s definitely created a guy everybody loves to hate in Loki, but beyond that, Tom has been incredible in terms of going around the world and promoting this film,” said Hollis. Alan Taylor, from TV’s “Game of Thrones” is directing “The Dark World,” replacing Kevin Branaugh. Anthony Hopkins, Idris Elba, Stellan Skarsgaard and Rene Russo return from the first film. Christopher Eccleston comes aboard to play the evil Dark Elf Malekith.

Asgard is Trending
Social media heat doesn’t always translate at the box office, but it does show trends and “The Dark World” is burning it up on Twitter. On Monday, five days out from its opening, it was mentioned in 125,570 tweets, compared to 95,609 of “Iron Man 3” at a comparable point. Its Facebook profile isn’t as strong, but it has more than 8 million likes.