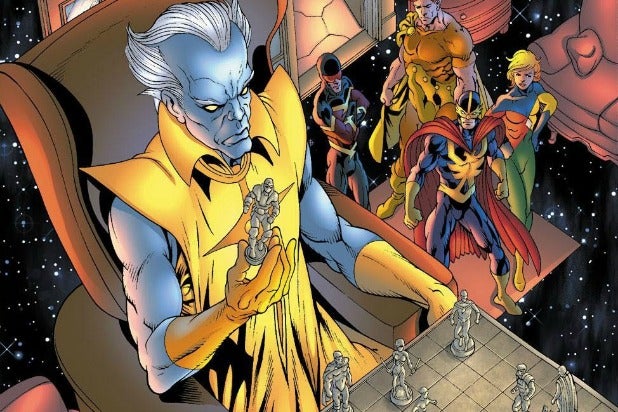 Even if you’ve seen “Thor: Ragnarok” and Jeff Goldblum’s hilarious role as the Grandmaster in the movie, there’s a fair chance that unless you’re a big Marvel Comics fan, you probably still don’t know what the hell this “Grandmaster” is all about.

As audiences have discovered by seeing the movie, the Grandmaster is exactly the kind of odd character that you’d want Goldblum to play in your space fantasy adventure. He’s one of those characters that Marvel refers to as “eccentric” — and since most Marvel characters are eccentric by normal standards, you know he’s really crazy. In the comics, the Grandmaster is usually is dressed like he is in the picture above. Which is great.

The Grandmaster is more than just a rich tinpot dictator with a gladiator arena and a lot of free time, though. He’s actually extremely old, incredibly powerful, and linked to the ubiquitous Infinity Stones that have tied all the Marvel Cinematic Universe movies together so far. And it’s a fair bet that he could be back in future movies, since there are plenty of comic book stories in which he’s involved. Here’s everything you need to know about the Grandmaster and where he could show up next in the MCU.

First off, the Grandmaster is old. Really, really old. He is counted as one of the Elders of the Universe, meaning that he has been around for billions of years. The Grandmaster is, of course, an alien. His species is long extinct and his home galaxy is destroyed. As a side note, we’ve already met an Elder before in the Marvel Cinematic Universe: The Collector, Benicio del Toro‘s character in “Guardians of the Galaxy,” is also one of those ancient beings.

Each of the Elders has a “thing” they do — the Collector collects things, obviously, and the Grandmaster is all about games. Specifically, he likes to invent his own games and tournaments. Usually, they have some kind of cosmic significance, and, often, the participants don’t even know they’re players in these games.

It helps that the Grandmaster has the power to travel through time and dimensions. He’s been known, in the comics, to take superheroes from one era and pit them against heroes from another, like sending modern Avengers back in time to fight superheroes during World War II.

In “Thor: Ragnarok,” the Grandmaster’s games take the form of a gladiator tournament on the planet Sakaar. When Thor shows up on the planet, as shown in the trailers, he gets tossed into the arena, where he’s forced to fight none other than the Hulk (Mark Ruffalo). Turns out, after Hulk flew off into space at the end of “Avengers: Age of Ultron,” this is where he wound up.

The story gets some inspiration from a comics story called “Planet Hulk” that begins similarly and ends with the Hulk as an arena gladiator on an alien planet. The Grandmaster wasn’t involved in those shenanigans, but he’s the guy in charge here in the movie. And given the current divide within the Avengers after “Civil War,” it makes sense to bring that conflict forward, even out in space.

The Grandmaster’s powers and the Infinity Stones

In the comics, the Grandmaster has been known to get his hands dirty. As an ancient god-like being, the Grandmaster obviously has some superpowers. In terms of physical capabilities, he’s basically Captain America on steroids. He’s also extremely intelligent and has crazy mind powers — he can read thoughts and control minds and so forth. He can teleport and travel through time, and he can resurrect people. He can manipulate energy in whatever way the story currently being told demands. None of that stuff actually happens in “Thor: Ragnarok,” though.

The Elders are known to each have an Infinity Stone, and the Grandmaster’s is the Mind Stone. In the MCU, however, Vision has that one in his head; it was retrieved from Loki’s staff from “The Avengers” and became the thing that helped create the super robot Ultron in “Avengers: Age of Ultron.” In fact, “Thor: Ragnarok” is pretty thin on Infinity Stones — the only one that shows up in the movie is the Space Stone, which is that blue cube from “The Avengers” called the Tesseract. It’s in Odin’s vault on Asgard, and Thor sees it when he stops by early in the film.

The six Infinity Stones are central to “Avengers: Infinity War,” a story adapted from the Marvel Comics in which tons of MCU heroes will come together to face off against one villain. That villain is Thanos, a guy who’s trying to gather all the Infinity Stones together to give himself ultimate power. Of course, the heroes will eventually win out over Thanos, but that raises the question of what could happen to the Infinity Stones once “Infinity War” is over. It seems reasonable they could wind up back in the hands of the Elders who wield them in the comics.

Where could the Grandmaster show up after “Thor: Ragnarok?”

Unlike the version of him seen in some of the comics, the Grandmaster prefers a hands-off role in “Thor: Ragnarok,” basically treating the situation on Sakaar like a rich, slightly mad king would. He commissions people to capture other people on Sakaar, purchases those people, and tosses them into the arena. He mostly just watches from above, pays people, and enjoys the life of a super-wealthy, Jeff Goldblum-like dictator.

The fate of the Grandmaster in “Thor: Ragnarok” is left somewhat up in the air. He pops up during a post-credits scene, but given his status as an Eternal, it seems extremely likely he’ll survive whatever might happen to him on Sakaar. And since we’ve already seen the Collector pop up in more than one MCU movie, we can hazard a guess that the Grandmaster and the other Eternals have other parts to play going forward.

The Grandmaster himself could wind up being a more major future MCU villain if he starts using his powers to do more than just make Hulk smash stuff. He likes to show up and use various heroes as literal pawns in games against other villains, often pitting squads of good and bad guys against one another. When he was first introduced in the 1970s, he created a team called the Squadron Sinister to fight the Avengers, using both as pawns in a game against a called Kang the Conqueror. The Avengers eventually won the battle, and the Grandmaster abandoned his four new supervillains as a result.

In fact, the Grandmaster loves to get involved with games in which the less powerful folks of the Marvel Comics universe — namely, all the characters fans know and love — get roped into bad situations where they have to fight each other, run off on scavenger hunts, and the like. Those games usually have pretty high stakes and characters are even killed in them.

At another point, the Grandmaster has used his powers literally challenged Death to a game in order to resurrect his fallen brother, the Collector. The game pitted two Avengers teams, the East Coast and West Coast Avengers, against each other, as well as a bunch of other heroes from Earth as well.

So there’s plenty of stuff the Grandmaster could get up to in the future once the Thanos situation is put to bed. It seems definitive that the MCU is slipping these bigger characters into small parts in various movies with the intention of giving them more to do later on. If Goldblum is interested in returning as the Grandmaster and “Thor: Ragnarok” is any indication, watching him engineer some goofy-but-deadly games for Marvel heroes to try to escape from would be a blast to watch.

We ranked all the enhanced humans in "Captain America: Civil War." There's 12 of 'em, which is more people than I know in real life. If you want jokes about how susceptible to peer pressure the Winter Soldier is, you're in the right place.

If you want a real discussion of who these armies of superheroes then click on our Who's Who explainer.