Jeff Lynn Johnson, a former reptile dealer featured in “Tiger King: Murder, Mayhem and Madness,” has died by suicide, Oklahoma City Police confirmed to CNN on Monday. He was 58.

A police report obtained by TheWrap stated that on Sept. 8, officers were dispatched to the Johnsons’ home after receiving a call about a reported attempted suicide. According to his wife, Charity, Johnson killed himself in front of her while they argued in the garage.

Johnson was still alive when they transported him to the hospital. He died later that night of his injury. 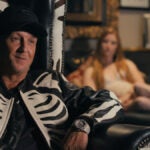 Jeff Lynn Johnson was born in Holdenville, Oklahoma, on Oct. 31, 1962. His obituary, published Sept. 16 in the Norman Transcript, stated that he worked at Norman Auto Trim & Glass and was a driver at L&A Wrecker in Norman.

A car enthusiast and animal lover, Johnson was previously a reptile dealer who briefly appeared in Season 1, Episode 4 of “Tiger King,” Netflix’s hit docuseries that premiered in 2020. In the show, he spoke about his relationship with its star, Joe Exotic. Season 2 of “Tiger King” premiered on Nov. 17.

Johnson is survived by his wife, two young children, his mother, and two brothers.