Tiger Woods is confident — but realistic — about a return to professional golf following a devastating car crash in February.

“I don’t have to compete and play against the best players in the world to have a great life,” he told Golf Digest Monday in his first video interview since the accident. “After my back fusion, for me, I had to prove it to myself– I had to climb Mount Everest one more time. I had to do it, and I did. This time around, I don’t think I’ll have the body to climb Mount Everest — and that’s OK. But I can participate in the game of golf.”

“Maybe, if my leg gets good enough, maybe click off a tournament here or there,” he continued. “But as far as climbing the mountain and getting all the way to the top — I don’t think that’s a realistic expectation of me.” 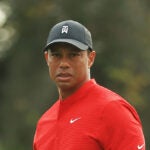 “I think something that is realistic is playing the Tour one day, never full-time ever again. Pick and choose — just like what [Ben] Hogan did — you pick and choose a few events a year and you play around that. You practice around it. And you try to gear yourself up for that, and you play. I think that’s kind of how I’m going to have to play from now on.”

“It’s an unfortunate reality, but it’s my reality,” Woods, the 15-time major champion, concluded. “And I understand it and I accept it. Just hopefully I can [time it] to the right tournaments.” 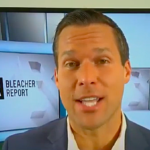 Woods covered a lot of ground in the Golf Digest interview — including walking into the room and to the computer, unassisted, for the video chat. That was definitely a purposeful decision. Walking itself is a win for Woods.

“It’s been hard, there is no denying that,” Woods, who is a longtime contributor to Golf Digest, said early on in the 30-plus-minute conversation. “I spent three weeks in a hospital and after that, I basically spent a total of three months in a hospital bed — I was in my house, but I was still in a hospital bed — and I didn’t do anything.”

These days, Woods is out of the bed, out of the wheelchair and off crutches — but he says walking up or down any sort of hill is challenging. 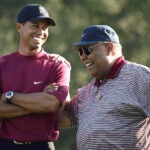 Woods was hospitalized in February after sustaining serious injuries to both his legs when his car flipped over in a single-car accident in Rancho Palos Verdes, California. The collision happened on the border of Rolling Hills Estates and Ranchos Palos Verdes, where Woods’ Genesis GV80 SUV was traveling northbound on Hawthorne Boulevard at Blackhorse Road.

Speeding was the “primary cause” of the crash, the Los Angeles County Sheriff’s department said. He was driving between 84 and 87 mph on a road with a speed limit of 45 mph.

Woods was pulled from the wreckage with an ax.