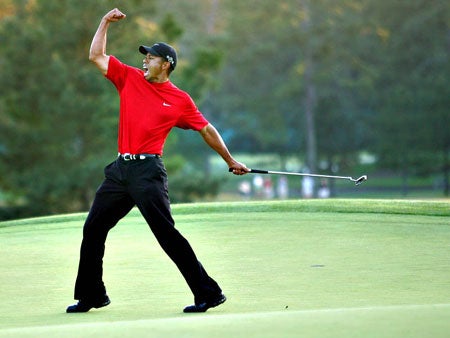 Tiger Woods announced Tuesday that he will make his return to professional golf at the Masters in Augusta, Georgia on April 8.

For CBS, it was a hole-in-one.

The network, which will broadcast the final two rounds of the tournament, can expect record ratings. Tiger’s first Masters win — in 1997 — garnered a 14.1 rating during the final round, with "an estimated 43 million viewers tuned to all or part of the broadcast." And back then, Woods wasn’t carrying a sex scandal in his bag.

Don’t think CBS doesn’t know it. Sean McManus, CBS News and sports president, told reporters last week that Woods’ return to golf "will be the biggest media event other than the Obama inauguration in the past 10 or 15 years."

For CBS, Woods will have to make first the cut to play the weekend, and he almost certainly will. (In 15 years of playing the Masters, he only missed it once, in 1996.)

"The Masters is where I won my first major, and I view this tournament with great respect,” Woods said in a statement posted on his Web site. “After a long and necessary time away from the game, I feel like I’m ready to start my season at Augusta.”

That Woods would select the Masters to make his return — following the sex scandal that reverberated throughout the sports and tabloid world for months — makes perfect sense. Media credentials are extremely limited at the tournament, and the galleries are known to be among the sport’s most reserved and polite. (The club has been known to pull badges from hecklers.)

And Woods, who hasn’t played since November, has never missed the Masters in 15 years since turning pro. He’s won the tournament four times.

"I have undergone almost two months of inpatient therapy, and I am continuing my treatment,” Woods continued. “Although I’m returning to competition, I still have a lot of work to do in my personal life.”

ESPN will carry early-round coverage on Thursday and Friday; CBS will televise the third and fourth rounds on Saturday and Sunday.

But, as CNBC’s Darren Rovell points out, ESPN and CBS are "already restricted to the number of hours they can show the Masters and more importantly, the number of commercials they can sell" — four minutes per hour.

Translation: the ratings boom won’t necessarily matter for either network this year.

The Masters is where I won my first major, and I view this tournament with great respect. After a long and necessary time away from the game, I feel like I’m ready to start my season at Augusta.

The major championships have always been a special focus in my career and, as a professional, I think Augusta is where I need to be, even though it’s been awhile since I last played.

I have undergone almost two months of inpatient therapy, and I am continuing my treatment. Although I’m returning to competition, I still have a lot of work to do in my personal life.

When I finally got into a position to think about competitive golf again, it became apparent to me that the Masters would be the earliest I could play. I called both Joe Lewis and Arnold Palmer and expressed my regrets for not attending the Tavistock Cup and the Arnold Palmer Invitational. I again want to thank them both for their support and their understanding. Those are fantastic tournaments, and I look forward to competing in them again.

I would also like to thank the Augusta National members and staff for their support. I have deep appreciation for everything that they do to create a wonderful event for the benefit of the game.