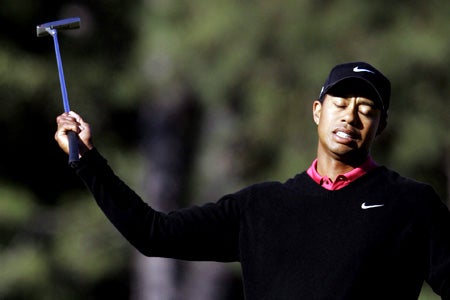 The sex scandal surrounding Tiger Woods – which began with his bizarre post-Thanksgiving driveway accident, admission of “transgressions” and announcement that he’s taking an indefinite leave from golf (and has him reportedly in seclusion, eating cereal and watching cartoons) – has cost Woods plenty of endorsements, fans and – perhaps – his family. But what has it cost the shareholders of those companies that are or were tied to Tiger’s formerly squeaky-clean image?

This, according to a new study by the University of California-Davis, published Monday.

According to the study –- entitled “Shareholder Value Destruction Following the Tiger Woods Scandal” — shareholders lost between $5 billion and $12 billion since the scandal broke on Nov. 27.

“Media accounts generally have focused on the damage that these events might cause to Mr. Woods’ future income-earning potential,” the study reads. Yet “because most of the firms that Mr. Woods endorses are either large or owned by large parent companies, the losses are extremely widespread.”

I’m pretty skeptical of studies like these, but less so about this one after skimming the methodology.

For what it’s worth, Christopher R. Knittel and Victor Stango, the authors of the paper, employ the “event study” method “commonly used in economics and finance to measure changes in shareholder value following unanticipated events.” The pair measured “losses relative to both the stock market as a whole and a set of competitor firms – in other words, relative to all firms that do not use Mr. Woods as an endorser. For example, we measure the losses for Nike shareholders considering both changes in the broader stock market, and changes in the value of Reebok.”

They admit, however, that the estimates in the report are “statistically noisy” because many of Woods’ sponsors – like Gatorade, for example — are part of larger conglomerates.

Click here for a PDF of the full study.