Time’s Up CEO and president Tina Tchen said that she believes former New York governor Andrew Cuomo’s administration used the organization — a legal defense fund that champions survivors of sexual assault and harassment — as a form of “cover” for their actions.

In speaking on the “Back to ‘Normal’” panel discussion Thursday hosted by TheSkimm, Tchen was asked about what mistakes. And she said she realized how the organization had been used after reading attorney general Letitia James‘ report about the Cuomo administration.

“We clearly see how we can be used as cover. And let’s be clear – what I believe happened with the Cuomo administration was we were used as cover in ways I had no understanding of until the AG’s report happened,” Tchen said. “That’s a problem, and we can’t let that happen. Our movement cannot be used as cover for folks who are trying to actually go at survivors or others.”

Tchen clarified they wanted to work with the Cuomo administration in the first place in order to pass meaningful legislation for survivors and believed that they valued the best interests of survivors.

“We actually thought we were working with an administration that had that in mind,” she said. “Turns out we found out from the attorney general’s incredible report that was not the case.”

Time’s Up has come under fire in recent weeks when it was found in the AG’s report that the group’s chairwoman Roberta Kaplan advised New York Gov. Andrew Cuomo and represented a former top aide, Melissa DeRosa, in working to discredit a woman who had accused him of sexual misconduct. The report ultimately found that Cuomo had sexually harassed 11 women (Cuomo has denied the accusations), and Kaplan subsequently resigned from her role as chairwoman with Time’s Up.

In the days since, Tina Tchen has addressed the “broken-trust moment” Time’s Up is facing and has said she will not resign, even as other survivors and celebrities have spoken out against the group. Tchen’s words also came in context of recent comments made by Shonda Rimes, who is a co-founder of the organization and said the idea that “Time’s Up has become viewed as a receptacle for and the focus of men trying to cover up their obscene behaviors is exhausting to me.” 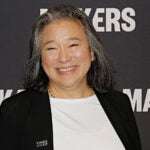 On the panel Thursday, Tchen acknowledged that she has a long history of working with powerful people. But Time’s Up’s mission she says has been to “hold powerful people accountable” and “work with them to make things better,” either by passing legislation or implementing new company policies.

But when it comes to the latter, or working with powerful individuals and organization to enact change, Tchen said Time’s Up needs to do so in a “responsible way that does not lead survivors to question us or feel as though we have betrayed them.

“The idea that my actions have caused pain to women is deeply, deeply and profoundly regretful to me,” Tchen added. “I am somebody who has worked with powerful people for a long time. I’ve obviously worked in the White House, I’ve worked for large institutions, that’s how I know that change can be made. But I’m learning how when you do that work, there are guardrails you’re going to need to put up, and probably more guardrails than I fully understood or anticipated.”

Tina Tchen appeared on the panel along with Fatima Goss Graves, president and CEO of the National Women’s Law Center, Ai-jen Poo, co-founder and executive director of the National Domestic Workers Alliance, and Tami Forman, CEO of Path Forward.

You can listen to the whole panel discussion here.