The specialty box office’s latest arrival is a wild ride: “Bones and All,” the Venice Film Festival award-winning cannibal romance from Luca Guadagnino that was released by MGM on five screens this weekend and grossed just under $120,000 for a $23,983 per theater average, in line with pre-release expectations.

“Bones and All” sees Guadagnino reunite with his “Call Me By Your Name” star Timothee Chalamet, who stars alongside newcomer Taylor Russell as a pair of cannibals who fall in love and embark on a tragic road trip across America. The film won Best Director and Best Newcomer honors at Venice and has received praise from critics with an 86% Rotten Tomatoes score, though its likely to remain a niche title as one would expect for a film with such a grisly taboo topic. 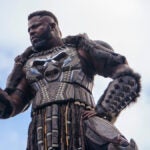 “Bones and All” will expand nationwide this Wednesday for Thanksgiving weekend, as will Universal’s “The Fabelmans,” which added $94,000 in its second weekend for per theater average of $23,500. With around $314,000 grossed so far, Universal will expand “The Fabelmans” to around 600 theaters for Thanksgiving weekend, with the hopes that Steven Spielberg’s acclaimed semi-autobiographical film will have a long run with older audiences through December.

Elsewhere, A24 released the military drama “The Inspection” in five theaters, where it grossed $65,942 for an average of $13,098. Written and directed by Elegance Bratton and based on his own personal experiences in the military, the film stars Jeremy Pope as a young Black man who joins the Marine Corps and is outed as gay, facing homophobia that makes him the target of a nearly lethal hazing incident.

Finally, Searchlight’s “The Banshees of Inisherin” added $703,000 from 812 theaters this weekend, bringing its total to $7.2 million after five weekends. Martin McDonagh’s tragicomedy will likely have one last burst of revenue from Thanksgiving weekend before its theatrical run wraps up in December.