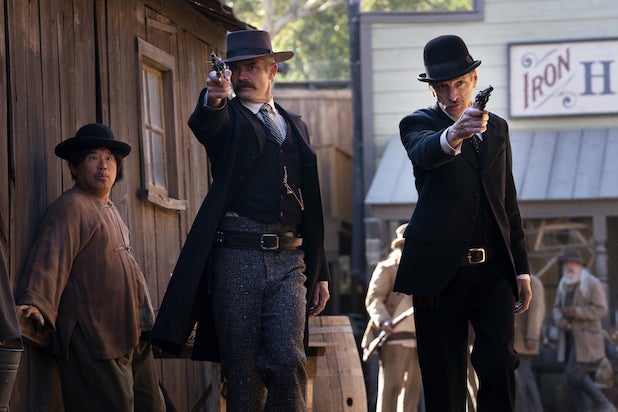 Since “Deadwood” ended its three-year run on HBO in 2006, Timothy Olyphant was always pretty sure of one thing about the profane Western series created by David Milch: It was not coming back.

“I thought it was never going to happen,” Olyphant told theWrap about a revival of the series in which he played Seth Bullock, a lawman in a lawless town. “There was no reason for it to happen. I think I’m on record as saying it’s tough to get that many people together for a barbecue.”

But Milch agreed to make a two-hour movie, “Deadwood: The Movie,” which picks up with the denizens of the town of Deadwood 10 years after the original series ended — and Olyphant, who in the intervening years had played the bad guy in “Live Free or Die Hard” and starred on the series “Justified,” among other jobs, finally realized that it might be time to pull on Bullock’s boots again.

“I had a meeting over at HBO, and they said, ‘Are you in or not? Because we need to tell people tomorrow.'” He shrugged. “Shortly after that moment, I realized, ‘Oh, we’re going to do this.'”

Olyphant was adamant that “I wasn’t interested in playing the same part again,” but he and Milch talked a lot about Bullock, who is based on a real Deadwood lawman from the late 1800s. “I don’t think he was interested in telling the same story, either,” he said. “So that passage of time was very present in our conversations.”

And when he got back on the set to work with costars like Ian McShane, Molly Parker, John Hawkes, Dayton Callie and others, Olyphant found that he was actually enjoying the revival he had initially resisted.

“I loved seeing everyone again, I loved watching everybody work,” he said. “I’m quite fond of a great many of those people — fond of them as people, fond of their work. They were already good at what they did a dozen years ago, and now they’re ridiculously good.

“A lot of times when you look back at these things, there’s all the things you remember, there’s the things you expect. What’s fun are the unexpected things, the things you’ve forgotten. And they come rushing back. Little tics that people did, things they said. Things I’ve been saying for 10 or 12 years, that I had forgotten I stole them from people on this set.”

Also Read: 'Deadwood' Movie Trailer: Al Swearengen Is Back and So Are His Rivals (Video)

One example: “I remember standing next to John Hawkes, and he said, ‘Well, let’s tighten up and get into character.’ I was like, ‘Wait, you say that? That’s what I say. Did I get that from you? I’ve been saying that for 10 or 12 years now. I got that from you, didn’t I?’ Things like that that just tickled me along the way.

“There were a bunch of those moments where someone did something, and I thought, ‘Oh, I do that. This must be the source.’ These people made a far greater impression on me than I think I gave them credit for.”

And while the original series ended when HBO cancelled it after Season 3, this time around the project had a built-in finality to it. Not only was it envisioned as a single, standalone two-hour film, but Milch said in 2015 that he’d been diagnosed with Alzheimer’s disease, making additional “Deadwood” films unlikely.

That finality, he said, gave “Deadwood: The Movie” a feeling similar to the final performance of a long-running play. “There’s a funny thing that sometimes happens when you’re doing a play,” he said. “On the last performance, every time another actor speaks, you really hear it because you know it’s going to be the last time they say it. And when you’re telling them things, you really want to make sure that they’re hearing it, because you know this is going to be the last time you say it. It takes on a weight. And oftentimes those last performances feel like, ‘Oh, that’s the play. There it is.’

“This movie had that kind of feeling. No one spoke about it, but I for one, realized, ‘Oh, this may be the last time I work with this person.’ It took on a weight, and at the same time maybe a joy.”

“I don’t know what the f— it is,” he said, laughing. “I was there, and I consider myself lucky to have been there.”