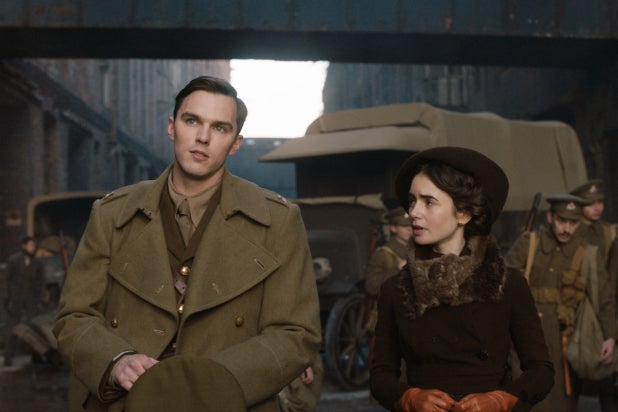 Dome Karukoski‘s “Tolkien,” a new biopic about the celebrated author of “The Hobbit” and “The Lord of the Rings,” throws into sharp relief the hitherto unexplored tragedy of the artist’s life. Imagine it: you’re one of the great artists of the 20th century, and yet your own story is embarrassingly contrived.

At least, that’s what we can glean from “Tolkien,” a biopic that hits so many familiar notes that it’s practically a cover song. It’s the ceaseless parade of foreshadowing, suggesting that every microscopic part of J.R.R. Tolkien’s fantasy novels was based on a specific, real-life event. It reduces everyone Tolkien knew to supporting players in someone else’s shameless “great man” narrative. If you were trying to produce a parody of what a Tolkien biopic would look like, you’d get the exact same film.

Nicholas Hoult stars as young Tolkien, a shy, bookish student whose life revolves around poetry and language. When we meet him, just in case anyone in the back doesn’t get it, he’s role-playing as a medieval knight in the British countryside. Then he’s forced to move away from The Shire (never mind where he actually was, the movie REALLY wants you to know it was like The Shire) and into the big city, where his mother immediately dies and leaves him and his little brother — about whom the movie quickly forgets — in the care of an elderly rich lady.

It is there that Tolkien meets the love of his life, Edith Bratt. Or rather, he sees her through a crack in a door while she plays piano, but then when she turns her head he immediately recoils, because that’s what love is like. She grows into a confident woman, played by Lily Collins, who is bright and outgoing and — by teaching Tolkien that words are meaningless without meanings — challenges his greatness while tacitly acknowledging said greatness and, in the process, making him greater. As though that were the most important thing in her life.

But Tolkien spends most of his time at school. The kids at his academy steal his copy of Chaucer to humiliate him in front of the professor, but the joke’s on those guys: J.R.R. Tolkien memorized it. Soon the kids in his class are wowed by his awesomeness and invite him to partake in boisterous frivolity, gallivanting in salons and city streets, flirting with girls and making plans to “change the world through the power of art.”

Plans which, surely, could not be interrupted by World War I.

The story of “Tolkien” has many embarrassing interludes, like the part where he’s about to be kicked out of school and then yells drunkenly in one of his made-up languages, to the fascinated wonder of a linguistics scholar, Professor Wright, played by Derek Jacobi (because, of course, he is). Or the scene where Tolkien is reading Wright a poem that eerily parallels the outbreak of World War I at the exact same second World War I breaks out, and Jacobi tells him to keep reading, as the scene of young men cheering the war effort turns to slow motion.

If they all play like J.R.R. Tolkien’s “greatest hits,” it’s understandable. The bulk of Karukoski‘s film is told in flashback, while the author is in the trenches, thinking back over every important moment of his life while he frantically searches for one of his college friends. At one point he’s forced to go over the top, into the battlefield, while explosions take the shape of the Balrog, flamethrowers turn into dragons, and Sauron himself looms in the distance.

If you thought “The Lord of the Rings” had nothing to do with war, your mind is going to be totally blown.

One of the most frustrating things about “Tolkien” is that the film doesn’t seem to be about the creation of J.R.R. Tolkien’s “Lord of the Rings” — it looks like it’s about the creation of Peter Jackson’s “Lord of the Rings.” The visual references to the author’s masterpiece are clearly inspired by the most recent, Oscar-winning adaptations, which is rather condescending. The significance of Tolkien’s life is not that it inspired six action movies; it’s that he wrote some of the most beautiful books in the English language. The overwhelming emphasis on connecting the biopic “Tolkien” to a bunch of blockbusters with more mainstream appeal seems calculated to the point of total insincerity.

It’s hard to appreciate the rich cinematography of Lasse Frank Johannessen (“Tom of Finland,” also directed by Karukoski) under all the visual references, just as it’s hard to find a good performance under the shallow screenplay. Hoult, typically an actor exciting depth and vivacity, seems trapped under the movie’s overwhelmingly angelic vision of J.R.R. Tolkien. The actor has been employed to facilitate hero worship, not to challenge our expectations of the subject or his life. He does the best he can. So does Lily Collins, who herself is trapped in one of the most thankless roles in recent memory and tries to bring personality to a character who isn’t granted much of it on the page.

“Tolkien” has a fancy cast and quality production values but, at its heart, it’s no less pandering or crass than the campiest Lifetime Original. “Magic Beyond Words: The J.K. Rowling Story,” for example, is just as shallow and has just as many laughable foreshadowings, but its limited ambitions give those shortcomings a lo-fi charm. The self-seriousness of “Tolkien” makes it nearly impossible to appreciate just how ridiculous a movie it really is. No one seems in on this joke. So the joke is evidently on them.