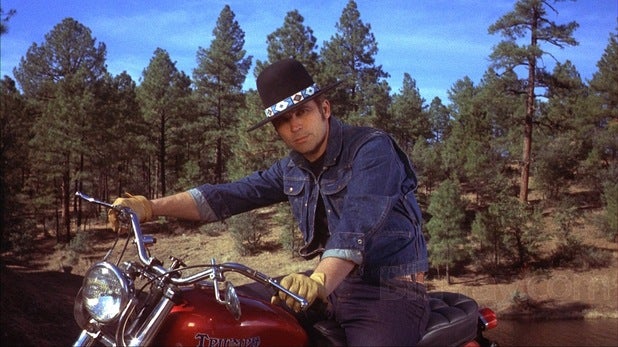 Tom Laughlin – Billy Jack – was the same on screen and in real life. He was an outsider, a fighter for his convictions, stubborn and uncompromising.

I got to know Tom in 2005, when he reached out to tell me about a new movie he was making to protest the war in Iraq. It seemed unlikely that at age 73, decades after bowing out of the movie business, he could resurrect Billy Jack.

But he was determined to try, and certain he could pull it off.

“We the people have no representative of any kind,” he told me at the time, when George Bush was still president. We met at his home out in horse country east of the city, his wife and collaborator of more than a half-century, Delores Taylor, was at his side, nodding. “It’s now the multinationals. They’ve taken over. It’s no different than the 70’s, but it’s gotten worse. And if you use words like ‘impeachment’ or ‘fascist’ you’re a nut on a soapbox.”

You couldn’t help but like a guy who spoke his mind and retained his youthful indignation for the underdog.

The movie never happened.  I spoke to Laughlin’s daughter Teresa on Sunday, shortly after the sad news that her father had died at age 82.

She said it wasn’t always easy growing up with a Dad like him.

“He was a fascinating guy, he had an extraordinary mind,” she said. “I can’t say I’ve come across many people whose facility of thought impressed me as much as his continued to. He was definitely an all-in kind of guy. Which I got from him.”

But, she went on, “there was no halfway to anything. As a result of that, it was a double-edged sword growing up as his child. It could be difficult, it also could be a blessing – that intensity.”

Teresa Laughlin, who appeared in two of the “Billy Jack” movies, is not alone in believing that her father has not gotten enough credit for revolutionizing the modern movie industry. The ever-stubborn Laughlin sued Warner Bros. top wrest back the right to distribute the film, when he disagreed with their approach. It took two years, but he won.

“Mr. Laughlin pioneered what is known as four-walling a theater: renting space from theater owners and collecting the box-office profits. He said he hired Mormons all around the country to work the ticket booths, figuring they could be trusted with the cash, and the film took in an astonishing $32.5 million.

“With the sequel in 1974, Mr. Laughlin spent $3 million, then a huge sum, on advertising to promote the film. He demanded cash upfront from exhibitors for the right to show it, and opened in 1,000 theaters, defying industry conventions of the time. The first week of box-office sales resulted in a banner headline in Variety: “Billy’s Sequel’s Grand $11 Mil Preem; Tom Laughlin Stuns Old Film Biz Pros.””

Said Teresa: “They used to open a film in one movie theater per geographic location. He decided that seemed nuts. He was the first to use national advertising.

“Everyone figured it was a suicide mission. He believed so strongly in the film and he wanted to do it his way… He four-walled the film, renting each theater.  And did a regional advertising blitz. That was the first baby step, that led to ‘The Trial of Billy Jack,’ which he opened in 1,200 theaters nationwide. You couldn’t touch a television or radio without a billboard announcing it.”

That transformed the opening day numbers.

“Jaws” took a page from “Billy Jack,” said Leiberfarb. He was hired by Warner in 1975 as a VP of marketing to develop planning around this and move beyond traditional newspaper advertising.

“Much of the work had to do with developing a model as to the optimum number of theaters… and the optimum number of gross rating profits and the correlation between the two,” he wrote. “Needless to say, this was highly disruptive to the existing release techniques and essentially depending only on newspaper advertising.”

But, Lieberfarb said, it worked. “Warner Brothers re-issued numerous movies such as ‘Jeremiah Johnson,’ ‘What’s Up Doc,’ ‘Summer of 42,’ ‘Superfly’ etc. etc. using the knowledge gleaned from Tom’s persistence and went on to use these techniques in the post ‘Jaws’ world,” he said.

Added Teresa Laughlin: “The first movie to piggy back on that was ‘Jaws.’ Dad used to joke that Steven Spielberg owed him a lot of money.”

Tom Laughlin died, appropriately enough, at the “golden hour,” as the sun slipped behind the hills at the Las Robles Medical Center in Thousand Oaks.

“Whenever he was filming, he was always talking about the golden hour,” said Teresa. “True to him directing his final moment, he passed at the exact moment that the sun tucked behind the hills. It was beautiful, orange light streaming into the room. “

Tom Laughlin was a unique individual, without a doubt, a force of nature even in his advanced years, and every ounce a fighter.

“He was a man who in life never really found peace,” said Teresa. “It eluded him for a number of reasons. For him to pass so utterly peacefully was a solace to me. He’s finally put down the sword. “