Tom Holland is totally down to Andrew Garfield return in “The Amazing Spider-Man 3.”

Spoiler alert: If you haven’t seen “Spider-Man: No Way Home,” it’s probably too late but you might want to stop reading.

“I would love to see The Amazing Spider-Man 3,” Holland told Comicbook.com in during a press event for Uncharted. “I think what was so wonderful was how Andrew was able to kind of make amends with the character and the studio, you know, to kind of win the general public back.”

Holland added: “That scene where he saved Zendaya like the fan reactions in the theater, was so spectacular. So should Sony decide to do that, they would have my full support, and obviously so would Andrew.”

And now that the movie has opened and the secret is out – yes, Garfield is in “No Way Home,” alongside his fellow Spider-Men Tobey Maguire and Tom Holland.

When rumors began popping up that Garfield might be appearing in “Spider-Man: No Way Home,” which finds Holland’s Peter Parker opening up the multiverse, the Oscar-nominated actor deftly dodged them and lied about his return to multiple outlets. 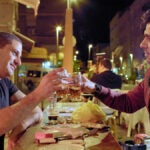 Garfield previously told TheWrap that while he found the secret-keeping stressful, he eventually came to find joy in lying about his return. “It was stressful, I’m not gonna lie. It was rather stressful, but also weirdly enjoyable,” Garfield said in an interview pegged to his awards-worthy role in “tick… tick… BOOM!” But he considered the lying as part of a massive game, he admitted. “It was like this massive game of Werewolf that I was playing with journalists and with people guessing, and it was very fun.”

The secret-keeping paid off; “Spider-Man: No Way Home” rocketed to the second biggest opening weekend of all time, with a box office haul of $260 million. The film’s current domestic total stands at nearly $737 million, with a worldwide total of a whopping $1.74 billion.