“Stowaway,” a Netflix sci-fi and drama movie starring Toni Collette, took Nielsen’s top spot for all films on streaming during the week of April 19, toppling the Melissa McCarthy comedy “Thunder Force” that had held the No. 1 slot for several weeks.

“Stowaway” was viewed for 359 million minutes during the week of April 19-25 after debuting on Netflix on April 22, according to the latest streaming figures from Nielsen. It beat out “Thunder Force,” which had another strong showing with 318 million minutes for the week. “Thunder Force” debuted on the list for the week of April 5 and topped not just the list of streaming movies but also the most minutes viewed for anything on streaming with 950 million minutes, beating out mainstays like “NCIS” and new episodes of “The Falcon and the Winter Soldier.”

During the week of April 19, “Stowaway” placed 10th among all streaming shows or films. Netflix also had the top three films for the week, with the Anthony Mackie thriller “Synchronic” placing third with 218 minutes. “Synchronic” was released by Well Go USA in 2020 and recently popped up on the streamer. 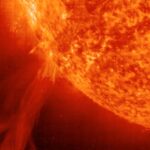 Also Read:
Solar Flares in Netflix’s ‘Stowaway,’ Apple’s ‘For All Mankind’ Are No Match for the Real Thing

Rounding out Nielsen’s top 10 for the week of April 19 were “Moana” on Disney+, “American Me” on Netflix, “Frozen” and “Frozen II” followed by “Raya and the Last Dragon” on Disney+, “The Little Rascals” on Netflix and “Soul” on Disney+.

“Stowaway” is directed by Joe Penna and stars Toni Collette, Anna Kendrick, Daniel Dae Kim and Shamier Anderson. The film is the story of a three-person crew on a mission to Mars who must face an impossible choice when they discover a man who accidentally finds himself sleeping aboard the ship, jeopardizing the amount of resources they have to reach their destination.