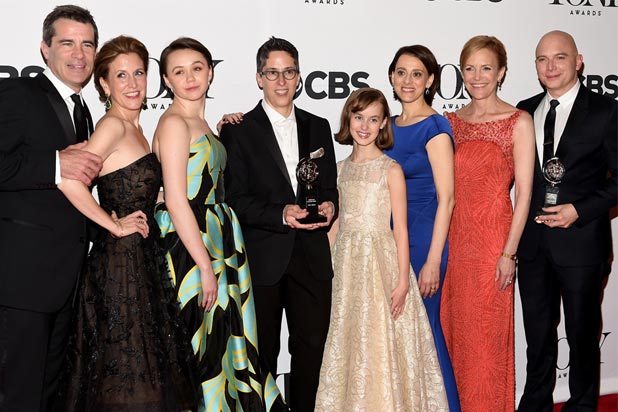 On Broadway, success breeds success breeds this year’s Tony winners. Shows like “Fun Home” and “The Curious Incident of the Dog in the Night-Time” that have recouped or are selling out were the big winners at the 69th Annual Tony Awards on Sunday night. Shows that needed the Tony recognition to bolster their box office — including productions on the financial bubble like “The Visit,” “Wolf Hall,” and “On the Town” — mostly fell short of the podium.

As expected, Simon Stephens’s “Curious Incident” won for Best Play, beating its closest rival, the two-part “Wolf Hall,” which has struggled at the box office and is now playing to only 50 percent capacity. “Curious Incident,” based on Mark Haddon’s best-selling novel about an autistic teenage boy, recouped several months ago and consistently performs at close to 90 percent capacity.

With five Tony wins, including prizes for Best Actor Alex Sharp and Best Director Marianne Elliott, should return the show to SRO business. “Wolf Hall,” nominated in those three major categories, could have used the awards to bolster business. Instead, the historical drama earned just one statuette, for Christopher Oram’s costume design.

In a close race for Best Musical, “Fun Home” beat “An American in Paris” — not that either show needed the award to bolster ticket sales. Both shows are consistently selling out in very differently sized venues. However, Kander & Ebb’s “The Visit” really needed the Tony to survive – it’s playing to under 50 percent capacity – and is now likely to shutter soon.

This is the second year in a row that the Best Musical Tony has gone to a production with an original score, as opposed to a song-book show. In 2014, “A Gentleman’s Guide to Love & Murder” was chosen over the Carole King musical “Beautiful.”

In other close contests in major categories, “Fun Home” also beat “An American in Paris” in directing (Sam Gold) and lead actor (Michael Cerveris).  And “Fun Home” created some Tony history with its victory in the Best Score category, with songwriters Lisa Kron and Jeanine Tesori becoming the first women to win the award. Kron also won for Best Book of a Musical.

Hot box office also translated into major Tonys for “The King and I,” which won for Best Revival of a Musical, beating “On the Town,” which has struggled in ticket sales since opening last fall. “King” also brought acting prizes for Kelli O’Hara, winning her first Tony after six nominations, and Ruthie Ann Miles in her Broadway debut.

“Skylight” won for Best Revival of a Play. The production recently recouped and continues to sell out each performance. “Skylight” competitors in the revival category had already shuttered on Broadway. “The Audience,” another sold-out show, nabbed two major awards in play categories: Best Actress, Helen Mirren, and Best Featured Actor, Richard McCabe.