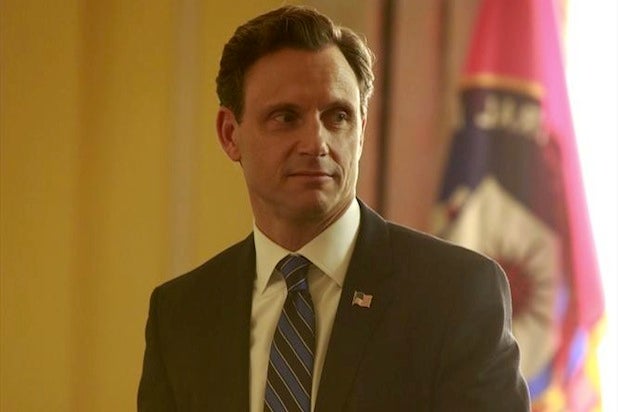 Tony Goldwyn confirmed what “Scandal” fans have come to expect on the ABC drama’s season finale on Thursday.

He continued, “Not only does everything come to a head as one might expect in a finale, but [creator and writer] Shonda Rhimes just goes beyond what any of us ever expected. It’s very shocking what goes down and very moving. And, again sort of reorders the ‘Scandal’ universe.”

On last week’s penultimate episode, a bomb was set for a very public funeral. Chief of staff Cyrus Beene (Jeff Perry) was given a heads up on the danger, but decided not to report it. Instead, Cyrus decided to stall the president from attending the funeral while the vice president and his opponent in the election, Sally Langston (Kate Burton), was already there.

He also co-created, executive produces and directs the first two episodes of WE TV’s first scripted drama, “The Divide,” which will premiere in July.

TheWrap: Whatever happens with the bomb on the season finale, where does that leave Fitz and Cyrus’ relationship?
Tony Goldwyn: What’s so weird about what Shonda manages to do is you would think that there’d be irreparable consequences to all of these relationships or any of the things that have happened over the course of at least two-and-a-half years. Yet, she keeps having our characters do these unspeakable things both to the audience then to each other and yet some how we’re still hanging with them and they’re dealing with each other. Look at Cyrus and James’ relationship, they still loved each other until James’ death. And for all of Cyrus’s bestial behavior we still grieved with Cyrus when James died. Cyrus is a monster. But, Fitz and Cyrus have some deep bond of friendship and professional partnership that can’t be separated.

Will we get to the election on the season finale?
We will experience the election, but I can’t say that we’ll know the results of the election by the end of the finale, but it does all culminate you know with the election. There’s not a lot I can tell you without giving stuff away, but I guess all I can say is it’s not what you think. There’s some really big surprises that happen.

How would you describe Fitz’s frame of mind?
Fitz is behaving in a very dark and cold way. He’s not being very likable now. I personally identify with where Fitz is coming from, because he does not know that Mellie was raped by his father, which is a big piece of information that has been withheld from him. And so without that information Fitz has been left to draw his own conclusions: That Mellie has been lying with Andrew this whole time. And yet at the same time, he feels betrayal of Andrew and he has an awful scene with Olivia where she forces him to say ‘I want Andrew to stop screwing my wife. If you wont let me get rid of him, I can’t have him screwing my wife in the White House. I just can’t tolerate that betrayal.’ It’s not a pretty moment for Fitz. So, we’ve got him in this very complicated bind right now.

What direction do you see the relationships going with both Mellie (Bellamy Young) and Olivia (Kerry Washington)?
I don’t know. I can never guess where Shonda is going to go. And at the same time, I’ve learned to really appreciate not knowing. I really trust her instincts a lot. I think she’s a brilliant woman and I’m just on this ride with her. The way I perceive it as an actor is in life we never know what’s going to happen. We know what we want to have happen. I can tell you what Fitz would like to have happen. But I have no sense of where Shonda is going to go with this.

What Fitz would want to have happen is to get through this election. He wants to be re-elected. He wants to hold his family together and try and repair some of the damage that he and Mellie have done to their children. And they’re on their way to kind of healing that. He’s still determined to be with Olivia and to be the president that he believes he is and can be and to get clean. He’s got this fixation with that. I can only guess or the only certainty I can have with that is Shonda’s not going to let that happen. That’s pretty much all I can predict. She’s going to make that extremely difficult for all of us.

Looking back on the season, was there a scene that you found absolutely enlightening about Fitz?
Well, I really love the scenes in Vermont. The fact that he built, that Fitz built that house for Olivia during a time of tremendous strain in that relationship when you thought this was the breaking point for these people. There’s no way they can come together. So, Fitz essentially kidnapped Olivia to bring her to this house to show her the dream. To me, that solidified what I always believed the power of Fitz’s commitment to Olivia.

What was it like working on WE TV’s “The Divide”?
It’s a series I co-created with Richard LaGravenese. We just finished our first season, which was produced by AMC. It’s going to be the first scripted show on the WE Network. I directed the first two episodes and Richard wrote most of it. That premieres July 15.

You’re the on-set of Lifetime’s “Outlaw Prophet.” What can you tell us about the project?
We’ve got quite a brilliant director named Gabriel Range. Things are going great. I’m really excited about it. It’s really, really a good script. It’s very dark and interesting. Lifetime is really pushing the envelope. I was like, ‘This is a Lifetime movie?’ Everyone’s really raising the bar these days.