Tony Leung, one of the greatest actors in the history of Hong Kong cinema, wants to make one thing clear about his role in “Shang-Chi” – his character may be a lot of things, including a “sociopath” and “a bigot,” but he’s not a villain.

Leung has spent four decades becoming a legend in Hong Kong. Now the man known for his performances in Wong Karwai’s “Chungking Express” and “The Grandmaster” is making his Hollywood debut with Marvel Studios’ “Shang-Chi and the Legend of the Ten Rings.”

While Leung has mostly skipped out on the press tour for the MCU’s next film, he discussed his latest role in a feature interview with Elle Singapore. In “Shang-Chi,” Leung plays Shang-Chi’s father, Wenwu, the immortal leader of an infamous criminal army known as The Ten Rings, named after ten mysterious armbands that give him incredible power. It was The Ten Rings that kidnapped Tony Stark back in “Iron Man,” setting the billionaire on his path to becoming an Avenger. 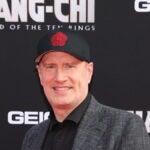 This is not only Leung’s first Hollywood role, but his first as an antagonist. But in approaching the complicated relationship between Wenwu and Shang-Chi, he says that he didn’t do so “from a villain’s standpoint.”

“Rather, I tried to explore the reasons that led him to become who he is. He’s a man with a history, who craves to be loved,” Leung explained. “He is also human, and he has a family. As I read [the script], I began to consider the many reasons why he’d turn out the way he is — a sociopath, a narcissist, a bigot.”

With its predominantly Asian cast, “Shang-Chi” certainly holds parallels to “Black Panther” in how it is expanding representation in the world’s most popular blockbuster franchise. The chance to be a part of that was something Leung said he couldn’t pass up.

When director Destin Daniel Cretton first described the role to me, he said there are many layers to the antagonist role, and hoped that I could come on board,” he said. “I accepted it because of the director. It just felt right. Plus, this is something I’ve never done before, to play an Asian supervillain. A chance to do something for Asia. I thought, why not?”

“Shang-Chi and the Legend of the Ten Rings” hits theaters on Sept. 3.