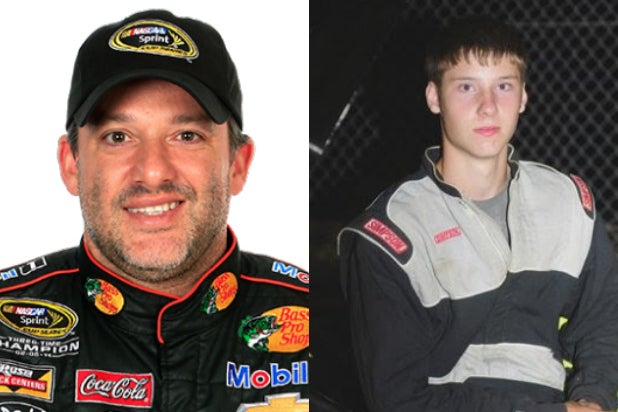 “He was just a very God-gifted kid,” Ward Sr. said, according to an article Tuesday in Syracuse.com. “I think he slept with a smile on his face.”

On the collision with Stewart, which resulted in his son’s death, Ward Sr. said: “I think the reason he probably got out of that car is who put him into the wall. He was definitely put into the wall.”

He added, “Apparently, Tony Stewart was the only one driving out there who didn’t see him.”

Ward Jr. was dressed in an orange and black suit with fluorescent stripes down the sides that glowed under the lights, his father told the paper. Ward Sr. also cited the raised caution flag causing racers to slow down and move to the bottom of the track.

“Tony Stewart was the best damn driver by far on the track that night,” Ward Sr. said. “Why he had to go up as high as he did and hog my son, there’s no reason for it.”

Ward Jr. was struck and killed by NASCAR star Stewart late Saturday night at the Canandaigua Motorsports Park in upstate New York during the Lucas Oil Super Sprint Feature race. The fatal crash happened after Ward “lost control mid-race, got out of his car, and was standing on the dirt track,” Ontario County Sheriff Philip Povero said in a previous statement.

As Ward stood outside of his vehicle, two cars approached him. “The first car swerved to avoid the driver out on the track. The second car, operated by Tony Stewart, struck the driver,” the police statement said.

It was the first time Kevin had ever gotten out of his car during a race, his father said.

Ward was transported to the F.F. Thompson Hospital where he was pronounced dead a short time later, officials said.

On Tuesday, the Ontario County Sheriff’s Department said that the investigation into the crash will take “at least another two weeks or more.”

Also on Monday, the Sheriff’s Department told local television station WCYB that there were no plans “at this time” to talk to Stewart again.

Meanwhile, investigators continue to seek witnesses, gather evidence, and develop the racetrack crash reconstruction, according to the Sheriff’s Department. “When the investigation is completed, we will meet with members of the Ontario County District Attorney’s Office and discuss with them all aspects of the investigation into the crash,” Sheriff’s officials said in a statement.

Canandaigua Motorsports Park — where the fatal accident occurred — will reopen on Saturday, according to track promoter Jeremie Corcoran.