(Warning: This post contains spoilers for Season 2 of “Too Hot to Handle.”)

The cast of “Too Hot to Handle” Season 2 failed pretty spectacularly at playing by the show’s rules, with near daily violations of the no sexual contact rule from one cast member or another. But few of the season’s “rule break” moments had as much impact — emotionally and financially — as Marvin and Melinda’s early morning tryst.

“You could see all of the gears working,” the show’s narrator, comedian Desiree Burch, said in an interview with TheWrap. “You can see her thinking, Look, I need to give him something he can feel and seal the deal on this. So I’m going to lose a shit ton of money and have everybody hate me because I’m betting on him. I saw her put all her chips on the table with that one.”

Burch identified Marvin and Melinda as her favorite couple from the season, noting their jaw-dropping good looks and seemingly endless relationship drama as two of the season’s highlights. (Though the “crab grab” does not go overlooked.) 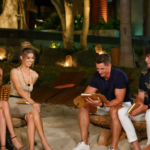 Also Read:
‘Too Hot to Handle’ Cast: Where Are They Now? (Photos)

“Melinda came in early, and she came in hard. It’s Marvin, it’s all about Marvin,” Burch said. “You’re only a couple episodes in and there’s already drama. Marvin’s over there like, I don’t even know what the hell I got myself into. … But she just decided he was the one — and I get it. If you’re looking at that spate of people, they’re all hot, but he’s ridic hot.”

Read more of TheWrap’s interview with Burch below.

TheWrap: What is the process like for you on the show? Are you looking at a cut of the episode when you’re doing the voiceover?

Burch: Everyone sort of asks, Oh, do you get to go to Turks and Caicos? And I’m like, no. Do you know how these things work? [Laughs.] When I sit down in the voiceover studio in central London, the producers have already done a cut a rough cut of the show with the narrative that they are drawing out of it. So it is, yes, it is a scripted thing. They’re giving me a script of what they think is going to work, but I’m both interpreting that script and, sort of adding to it. And then it’s this sort of round robin of that then going to Netflix, and then back to the production company. … Part of the fun of the show is hearing this sort of British sarcasm out of an American voice, but also we kind of need to make sure that we’re taking care of the people who are on the show, and not, you know, lacerating them too much. It’s a fun process, but it’s a funny one.

I imagine that this is the kind of show where it’s really easy to go really far with the humor. Do you ever find yourself having to pull back?

Yeah, you can go quite far, even just saying, like, what the hell is going on? So yeah, we do have to pull back quite a bit, or at least I do. But I think that some of that’s in there. And it’s important to remember obviously, that these people have like in these weird pressure cooker conditions and submitted their lives for complete exposure — thir lives, their bodies, sex lives, everything. So making sure to be you know, lovingly critical is an important thing to do. I mean, some people are there only half the season and they come in, lose a bunch of money and dip, so whatever, but it is easy for us who are at home and who have been isolated to judge the people who’ve got this lovely little opportunity in the middle of lockdown to go on a vacation and meet a bunch of hot strangers.

How close would you say the narration is to your own sense of humor?

I mean, on my better days, I would like to be a little bit closer to the humor on the show. My stand up is a lot more blue. I wear my heart on my sleeve a little bit — I’ll talk about any- and everything. I like the fact that that there is a bit of like cleverness to it. There is a certain amount of like, playing the cards closer to the chest in the narration that I don’t necessarily do in my comedy. That I think I would love to be able to take on board a bit more. You know, for me, if I’m getting up in front of an audience, I’m just kind of like, okay, brass tacks, let’s get up to the elbows. And I think that’s why that I might appeal to some people and not to others, but this kind of comedy might reach a broader audience. I don’t know how much I’m ever going to actually go for that, but it’s cool to see people get a taste of what my voice actually is from this without giving the entire meal.

Were there any couples you were rooting for this season?

I’m gonna sound real obvious when I say Marvin and Melinda. They went through the most. Melinda came in early, and she came in hard. It’s Marvin, it’s all about Marvin. You’re only a couple episodes in and there’s already drama. Marvin’s over there like, I don’t even know what the hell I got myself into. And she’s just like, yeah, I’m intense. I don’t know what to say. There was a lot about that that I could relate to. Because she’s, like, totally gorgeous but underneath that she’s such a dynamic individual who really goes after what she wants and can be really intense, and that can put people off. I can see, especially as another Black woman — I understand that there’s a lot going on for you and there is a pool that a lot of people might feel like it’s too deep, so it’s easier for you to just sort of be super hot and do this sort of casual thing. But she just decided he was the one — and I get it. If you’re looking at that spate of people, they’re all hot, but he’s ridic hot. 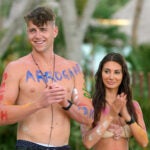 Which rule break this season was your favorite?

There’s so many, but the first one that comes to mind — I don’t know if it was my favorite or my least favorite because it’s so intense — the one where [Melinda] just like, wakes up out of bed and she’s like, you know what? Now. Because you could see all of the gears working. You can see her thinking, Look, I need to give him something he can feel and like seal the deal on this. So I’m going to lose a shit ton of money and have everybody hate me because I’m betting on him. I saw her put all her chips on the table with that one.

But also, I mean, the “crab grab.” There’s so many great ones. … For me, it’s more when you can see the mechanics at work, versus some of the more random ones, like when Tabitha was in the shower. That, to me, is like, okay, you’re creating some TV drama because you’re just showing up. It’s the ones where you can specifically feel like you’ve been in a similar situation or someone you know or care about has been there. It’s when I can see the gears turning in their head as they work out what they think they’re going to get from this particular rule break.

And Melinda’s rule break was at like 6:00 in the morning, which really makes you wonder if she was just lying there all night thinking about it.

Yes! That’s why I was just like, that is shit. We didn’t see how she sat there all night thinking about it, or she woke up after having a dream about it, and he was just in the other bed. Either way, that came from someplace deep — that fear or desire, or both? That was just like, This is happening right now, and I don’t care how many zeros come after the number. That was just so out there for me, but I see why she did it. I can’t say it’s right or wrong, but I see why she did it. There was a lot going on for her that night.

If you had a vote in the finale, who would you have voted for?

Oh, I definitely would have voted for Marvin, out of the three finalists. I mean, I do think Cam did go through a lot, but some of that was his own fault. I definitely feel like they just had to get Carly in there, God bless her. I was maybe surprised to see Nathan wasn’t there, because I feel like even though he didn’t wind up with a relationship, he definitely was quite vulnerable and went through a lot trying to make things work with Larissa even though it just was not meant to be. I honestly felt like both Marvin and Melinda went through a lot of change, but I think Marvin knew he was gonna have to be vulnerable about this and, for lack of a better way of putting it, man up about his feelings and about where this is coming from … I love that facet about the show, it does get just beneath the surface, but enough to really start to get them out of their posturing and into a place of authenticity, which I think that we all need by the time we’ve seen them for X amount of episodes. So yeah, out of those three, I definitely would have voted for Marvin.

Both seasons of “Too Hot to Handle” are available to stream on Netflix.