A multinational PR firm with a roster of blue-chip brands like Netflix, Coca-Cola and Starbucks is privately advising clients to stay neutral on the leaked Supreme Court draft opinion that would end constitutional protection of abortion rights under Roe v. Wade, according to a Friday report in Popular Information.

The independent newsletter and site obtained an internal email from Zeno Group, a subsidiary of Edelman with offices all around the United States and the world. The message from Zeno’s Executive Vice President for Media Strategy Katie Cwayna warns that the media “will look for corporations to take a stand” on the leaked draft opinion and “make their views known.” 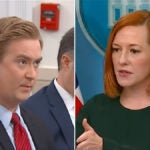 Also Read:
Jen Psaki and Peter Doocy Make Up Before the Breakup: ‘Sorry to See You Go’

Cwayna’s message includes “a template email to share with client contacts,” according to Popular Information. In that template email are echoes of Disney’s months-long tangle with how to respond to Florida’s parental-rights law, which critics dubbed the “Don’t Say Gay” bill before it was passed.

“Do not take a stance you cannot reverse, especially when the decision is not final. This topic is a textbook ’50/50’ issue. Subjects that divide the country can sometimes be no-win situations for companies because regardless of what they do they will alienate at least 15 to 30 percent of their stakeholders… Do not assume that all of your employees, customers or investors share your view.”

Popular Information reported that the email was sent to Zeno staff but did not specify whether it had been shared with any of Zeno’s global clientele. The template email also suggests a temporary halt on pitching to “breaking news outlets” on any topic, and warns that not all media inquiries are what they seem:

“Avoid media ‘fishing.’ Often during controversy, media will make general inquiries to multiple peer organizations, in which the first one to ‘raise its hand’ becomes the lead.  In a case like this, being at the center is not advisable so be judicious if/how general inquiries are managed.”

Email messages TheWrap sent to Zeno executives were acknowledged as received Friday, but not immediately returned.

Social media was also a special point of concern. Zeno suggests brands just flat-out ignore anyone who might raise the topic.