Earthbound film critics have been raving about Alfonso Cuaron‘s “Gravity” since it premiered at the Venice Film Festival late last month, but what about the verdict from someone who understands what it’s really like to be in space, the setting for Cuaron’s imaginative and exhilarating survival drama about astronauts marooned in orbit after an accident miles above Earth?

As it turns out, somebody who knows the experience raved about the movie, too.

“Fortunately, the five months I spent on the space station were way calmer,” said Canadian astronaut Chris Hadfield, when asked his reaction to the film after its Toronto International Film Festival premiere Sunday. “But the visuals were spectacularly good. I don’t know how you did it.” 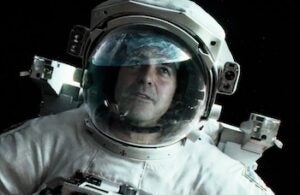 Looking over at Sandra Bullock, who plays an astronaut who must fight for her life over a tense 90 minutes, he added, “And if I ever fly in space again, I want to fly with Sandra.”

Cuaron himself said that he was very scared when an audience member asked Hadfield the question — but then, the Mexican director had reason to be nervous regardless of whether any real-life astronauts were in the audience.

After all, when a film has been called the most extraordinary cinematic experience of the year at two previous festivals, what in the world (or out of this world, for that matter) could “Gravity” possibly do for an encore in Toronto?

Anything shy of a rapturous reception, complete with mega-Oscar buzz and proclamations that it was the greatest space movie since “2001,” would be seen as a sign of weakness; after all, “12 Years a Slave” was declared a certain Best Picture winner in some circles when it premiered in the same theater, the Princess of Wales, on Friday.

But it’s safe to say that “Gravity” held its own against the stiff competition. Cuaron was greeted with a standing ovation after the screening — and more to the point, the audience erupted into applause at a key moment during the film, something TIFF audiences did last year for “Argo” and before that for “The King’s Speech.”

“Gravity” is a dazzling technical achievement that quietly turns into something more than that, and Bullock, who is alone onscreen for most of the film’s running time, gives a performance far richer and more resourceful than we’re accustomed to seeing in films largely constructed by computer-graphics whizzes.

The end of the film is not just an adrenaline rush, but a deeply moving emotional moment — and that’s a key for awards season. Academy voters like being thrilled, certainly, but they need to be moved; tears will always get a film further than shocks.

The film may not pack the harrowing punch or have the historical heft of “12 Years” — but as a look to the future of effects filmmaking with a heart and a brain, it has to figure in any conversation about the year’s best.

The Academy didn’t give Cuaron’s last film, “Children of Men,” nearly the recognition it deserved; it’s unlikely they’ll repeat that mistake with “Gravity.”

In the Q&A that followed the screening, Cuaron talked about the technical challenges of re-creating zero gravity (or, to be more accurate, micro gravity) while still being able to focus on the actors’ performances.

“The challenges were more for the people around me than for me,” he said, before adding, “It’s good to work with geeks.”