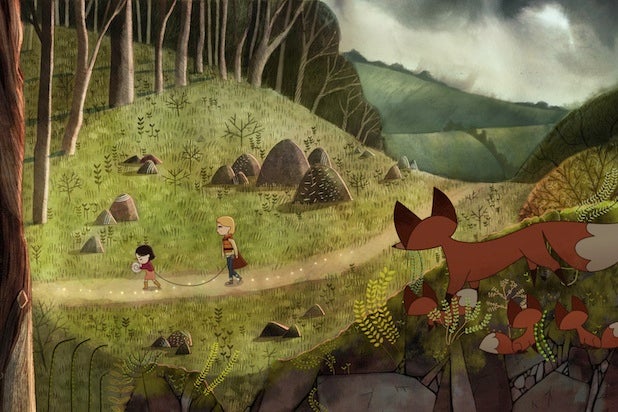 "Song of the Sea"

The Oscar race for Best Animated Feature doesn’t have a strong favorite this year — nothing as dominant as “Frozen,” “Toy Story 3,” “Up,” “Rango” or the other clear frontrunners in previous years. Instead, we could be looking at a dogfight between the likes of Warner Bros’ “The Lego Movie” (too subversive?), DreamWorks Animation’s “How to Train Your Dragon 2” (a sequel) and Disney’s “Big Hero 6” (too comic-booky?).

But some smaller films are also in the running this year, and American distributor GKIDS brought two of them to Toronto in advance of their qualifying runs. Both have some Oscar pedigree: “Song of the Sea” is from the Irish director Tomm Moore, responsible for the 2010 nominee “The Secret of Kells,” while “The Tale of the Princess Kaguya” comes from Studio Ghibli, which has been nominated for two of founder Hayao Miyazaki‘s films and won for “Spirited Away” in 2002.

Both films are based on old folk tales, and both are far different from the glossier productions from American companies. Like “The Secret of Kells,” “Song of the Sea” is based on an old Celtic legend – and like Moore’s previous film, it is a visually rapturous, hand-drawn affair that glories in the intricacies of Celtic design, as rendered in the gorgeous flatness of 2D animation.

(In fact, it plays like an inside joke that at a couple of points in the film, the young hero puts on a superhero cape and a pair of what look like cardboard 3D glasses — you certainly won’t find any of those in theaters showing the film.)

“Song of the Sea,” which premieres at Toronto on Saturday, is taken from Irish legends about selkies, mystical creatures who live as seals in the water but as humans on land, and of the world of faeries and giants that populate the legends of the Emerald Isle. Its hero is a young boy who discovers a magical world through which he must venture to save his sister, who turns out to have secret powers crucial to the survival of that world.

At times it has the look and feel of a kids’ story, but Moore is drawing from a deep well of myth, and he ends up casting a spell that does justice to the rich folklore at the heart of his story. His film opens with and draws inspiration from haunting lines from W.B. Yeats’ “The Stolen Child” – “Come away, O human child / To the water and the wild / With a faery hand in hand / For the world’s more full of weeping than you can understand” – and  incorporates marvelously evocative Irish songs like “Dulaman,” as well as new compositions from Bruno Coulais and the band Kíla.

The result can legitimately be described as magical, and it gives the small, New York-based company GKIDS a good shot at ending up in the Oscar race again, as it has in the past with “Secret of Kells,” “Chico and Rita” and “A Cat in Paris.” While “Song of the Sea” won’t come as the surprise that “Kells” did in 2010, it is a work of handmade beauty which could well stand out to the animators who make up much of the voting body in the category.

“Tale of the Princess Kaguya”

“The Tale of the Princess Kaguya,” which premieres Friday, may be a harder sell to voters – not because it isn’t worthy, but because its deliberate storytelling rhythms and two-hour-and-17-minute running time could hurt it with animation viewers accustomed to snappier work.

The latest film from Studio Ghibli, the legendary Japanese animation company headed by recently-named honorary Oscar winner Hayao Miyazaki, “Princess Kaguya” comes from director Isao Takahata, whose previous films include “Grave of the Fireflies” and “My Neighbors the Yamadas.” He is now 78, and he has said this will be his final feature film – just as Miyazaki did after making “The Wind Rises” last year.

Like “The Wind Rises,” it is a fitting summation, elegiac and concerned with the passage of time. Based on the Japanese folktale that goes by the name “The Tale of the Bamboo Cutter,” it focuses on a tiny princess found by a cutter when she emerges from a bamboo shoot; she turns into a baby, then matures quickly into a young woman whose beauty attracts a bevy of highborn suitors.

Takahata specializes in watercolors and charcoal drawings, and he initially tells his story in muted colors before the film becomes more vibrant. The look is gorgeous if understated, the rhythms slow, with the film reaching a visual and emotional peak in its final half hour.

The most rapturous sequence involves flying – as “The Wind Rises” showed last year, something about flight brings out the best in Studio Ghibli.

The story eventually circles back to a development we’d seen coming for at least an hour, though Takahata refuses to tidy up his folktale source the way so many American animated features have done. Instead, thankfully, “Princess Kaguya” is a reminder that folklore can be dark and sad and mournful, too.

And while you won’t find dark and sad and mournful in the logline of too many Oscar animation nominees, even cartoons could do with a little nicely-drawn tragedy every so often.