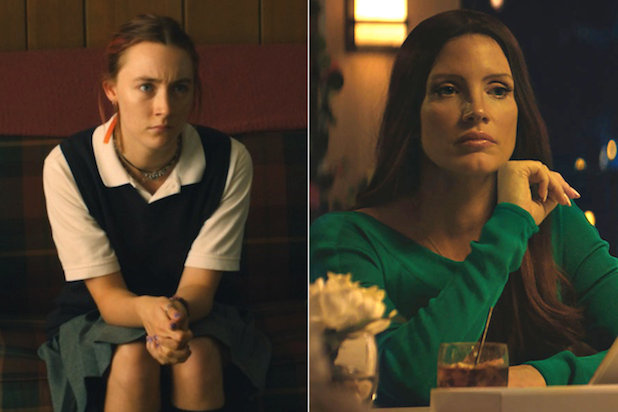 If after its first weekend the Toronto International Film Festival is so far inconclusive, one thing is truly clear: This year’s TIFF belongs to the women.

One-third of the films in the official selection were directed by women, a new high, including such notable works as Greta Gerwig’s “Lady Bird,” Lynn Shelton’s “Outside In,” Valerie Faris (with Jonathan Dayton)’s “Battle of the Sexes,” Susanna White’s “Woman Walks Ahead,” Haifaa al-Mansour’s “Mary Shelley,” Chloe Zhao’s “The Rider,” Clio Barnard’s “Dark River” and Nora Twomey’s “The Breadwinner.”

But more than that, the great performances so far at this festival have predominantly come from women, suggesting that this year’s Best Actress race at the Oscars could be more competitive than Best Actor.

For starters, there was Saoirse Ronan in “Lady Bird,” bringing vibrant life to a sharp, disaffected teen.

There was Jessica Chastain in Aaron Sorkin’s talky, supercharged “Molly’s Game,” and also in “Woman Walks Ahead,” the period drama whose title might as well be the theme for this year’s festival.

There was Jennifer Lawrence, almost never off screen and almost always in extremis in Darren Aronofsky’s horror-film fever dream “mother!”

There was Dame Judi Dench, who won three standing ovations from the Princess of Wales crowd at the premiere of Stephen Frears “Victoria & Abdul,” in which she plays an aging, lonely Queen Victoria. Emma Thompson, matchless as a tightly-wound judge in Richard Eyre’s “The Children Act.” And Helen Mirren, heartbreaking alongside Donald Sutherland in Paolo Virzi’s “The Leisure Seeker.”

Margot Robbie, meanwhile, was by all accounts a delight as Tonya Harding in “I, Tonya,” which also boasts a sparking supporting turn by Allison Janney. And reigning Oscar champ Emma Stone played a more virtuous athlete, Billie Jean King, in “Battle of the Sexes.”

Then there was Edie Falco in “Outside In,” Julianne Nicholson in “Who We Are Now” and Ruth Wilson in “Dark River.”

And seven-year-old Brooklynn Prince, a remarkable discovery in Sean Baker’s “The Florida Project.”

That’s a small sampling, and there are more wang in the wings for Monday, when the festival will hold s first screenings of Guillermo del Toro’s “The Shape of Water,” which contains an acclaimed performance from Sally Hawkins”; Andy Serkis’ “Breathe,” featuring Claire Foy; and “Unicorn Store,” directed by and starring Brie Larson.

Monday’s other premieres include Angelina Jolie’s Cambodian film, “First They Killed My Father,” Scott Cooper’s period western “Hostiles,” which went over well in Telluride, and Joe Wright’s “Darkest Hour,” Gary Oldman as Winston Churchill on the of World War II.

And that plethora of Monday debuts is one of the reasons why TIFF has been inconclusive so far. The rule that says films that premiered at other festivals can’t get a prime booking during Toronto’s opening weekend has produced a Monday night glut, and

Still, it’s safe to say that George Clooney’s dark comedy “Suburbicon” didn’t rally much from its lackluster Venice debut, and Alexander Payne’s “Downsizing” was appreciated but not universally embraced, while Darren Aronofsky’s “mother!” thrilled some and offended others.

And it’s even safer to say that on the first weekend of TIFF 2017, men had to take a back seat to a whole lot of wonder women.