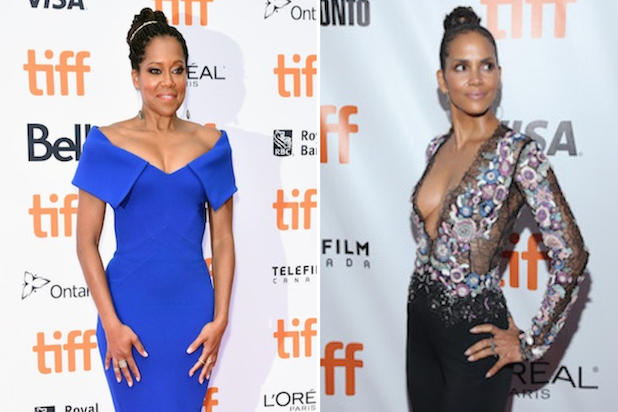 The feature directorial debuts of Halle Berry and Regina King will be part of the lineup at the 2020 Toronto International Film Festival, organizers announced on Thursday.

Berry’s film, “Bruised,” features the actor and director as a mixed martial arts star fighting for custody of her young daughter. King’s “One Night in Miami” is based on a play that fictionalizes a night in 1964 in which boxer Cassius Clay (soon to be Muhammad Ali), singer Sam Cooke, football player Jim Brown and activist Malcolm X met in a Florida hotel room.

Nearly half of the 50 selected features, 23, have a female director or co-director.

Other films among the 50 titles announced by TIFF include Chloé Zhao’s “Nomadland,” a drama from “The Rider” director that stars Frances McDormand; Francis Lee’s “Ammonite,” a female romance set in 1840s England and starring Saoirse Ronan, Kate Winslet and Fiona Shaw; Reinaldo Marcus Green’s “Good Joe Bell,” starring Mark Wahlberg and Connie Britton and written by “Brokeback Mountain” screenwriters Larry McMurtry and Diana Ossana; Ricky Staub’s “Concrete Cowboy,” with Idris Elba and Jharrel Jerome; Florian Zeller’s “The Father,” with Anthony Hopkins and Olivia Colman; Glendyn Ivin’s “Penguin Bloom,” with Naomi Watts and Jackie Weaver; Ben Sharrock’s “Limbo,” about a Syrian musician waiting in Scotland for a decision on his asylum request; Sonia Kennebeck’s “Enemies of the State,” about a family whose hacker son is targeted by the U.S. government.

Also Read: 'The French Dispatch,' 'Soul' Make the Cannes 2020 Lineup As Festival Reveals the Movies It Would Have Shown

As previously announced, Spike Lee’s film “David Byrne’s American Utopia,” a document of Byrne’s Broadway show, will be the opening-night film on Sept. 10. Mira Nair’s “A Suitable Boy,” taken from a decades-spanning TV miniseries, will close the festival 10 days later.

Viggo Mortensen’s “Falling,” which premiered at the Sundance Film Festival in January and was also chosen for the canceled Cannes Film Festival, will be part of the Toronto Film Festival lineup as well.

The lineup is long on films from around the world, with offerings from such international auteurs as Thomas Vinterberg (“Another Round”), Michel Franco (“New Order”), Kornél Mundruczó (“Pieces of a Woman”), Naomi Kawase (“True Mothers”) and François Ozon (Summer of ’85”).

In a pandemic-affected year that has seen most awards shows postponed until deep into next year, the Toronto lineup is noticeably lacking in many studio awards films that typically use the fall festival circuit to launch their biggest contenders. While additional programming will be announced in upcoming weeks, TIFF has said that its feature lineup will consist of 50 films, the number that was announced on Thursday.

The Toronto Film Festival will be significantly scaled-down from its usual size, which typically includes more than 200 features over 10 days. The industry presence will be reduced, with many events and all press screenings taking place on the festival’s private viewing platform rather than in Toronto. Socially-distanced screenings will take place for local audiences, with the festival organizers saying in a statement that TIFF continues to work with public health officials, “with its number-one priority being the health and well-being of both Festival filmgoers and the residents of the entire community.”