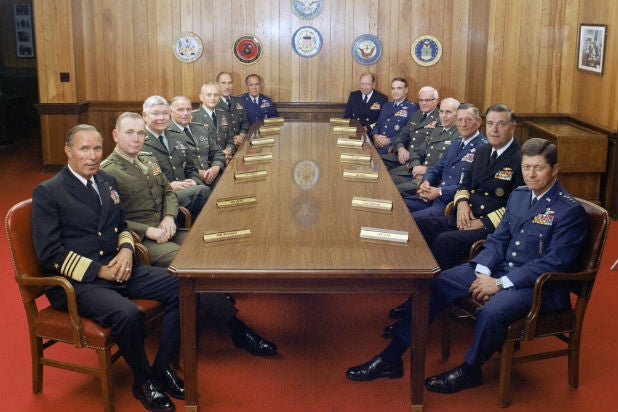 Michael Moore‘s first documentary in six years is one of his most optimistic films ever. The firebrand filmmaker, best known for the scorched-earth humor of “Fahrenheit 9/11” and “Bowling for Columbine,” still shows his angry side at times in “Where To Invade Next,” which premiered at the Toronto International Film Festival on Thursday night. But on the whole, this is a film that looks for the good rather than pointing fingers at the bad.

In its first screening anywhere, it was greeted with repeated laughter and applause during the film and an extended standing ovation afterwards.

“We were digging for something else in this movie,” said Moore when he introduced the film at the Princess of Wales Theatre. “It’s called the American soul.”

The premise of the film is that the Joint Chiefs of Staff have called a secret meeting with Moore and admitted to him, “Michael, we don’t know what the f— we’re doing,” calling off any further military intervention around the world and asking Moore to do the invading from now on.

But that’s just a jokey setup for the real movie, which involves the filmmaker traveling from country to country and trying to “steal” the things they do better than the United States. That includes eight weeks of paid vacation for workers in Italy, no-homework schooling in Finland, gourmet school lunches in France, free college tuition in Slovenia, a rehab-focused prison system in Denmark, the prosecution of those who caused the bank collapse in Iceland …

One particularly priceless exchange came when Moore shows photos of American school lunches to a chef responsible for lunches at a French school. “Frankly, that’s not food,” says the chef.

The film lacks the focus of previous Moore films like “Roger and Me,” “Bowling for Columbine” and “Fahrenheit 9/11.” It’s scattershot, hopping from one country to another and one issue to another until it gets a little wearying.

The director pointed out in the post-screening Q&A that the film won’t quiet his most avid critics, who are sure to point out that he’s cherry-picking policies he likes in Europe, but leaves out the economic woes that have followed.

“I know what the headlines are going to be like from my critics tomorrow,” he said. “But if you want to know why I didn’t mention Italy’s high unemployment rate or whatever, the reason is that I went there to pick the flowers, not the weeds.”

Those flowers make for one of Moore’s funniest films, and one that is sure to play well to fans of his previous work.  And the common threads running through “Where To Invade Next” make it stronger: labor is a key theme for the first half of the film, the empowerment of women one in the second half.

The conclusion is a powerful one that further helps to make this “Mike’s Happy Movie,” as Moore points out that many of the great ideas he’s been touting originated in the United States.

“We don’t need to invade,” he says near the end of the film. “We just need to go to the American lost and found.”