Daniel Radcliffe‘s trip into the birth of the Beat Generation, a low-budget film noir set in Texas and a pair of films from Iranian directors are included in this final look at a few more of the nearly 300 films that screened at the 2013 Toronto Film Festival.

TIFF’s closing night film, Daniel Schecter’s Elmore Leonard adaptation “Life of Crime,” premieres on Saturday night, and the festival comes to an end on Sunday with the announcement of awards and a final day of screenings.

In his admirable determination to leave Harry Potter in the dust, Daniel Radcliffe came to Toronto with three dramatically different movies: “Horns,” in which he plays a man who wakes up having sprouted a pair of devil horns; “The F Word,” a lively and fresh romantic comedy with Zoe Kazan; and “Kill Your Darlings,” with Radcliffe as the poet Allen Ginsberg in his first year at Columbia University in the 1940s.

The film has been playing the festival circuit since Sundance, and is far from the first recent movie to tackle the birth of the Beat Generation; “On the Road” screened at Toronto last year, while Rob Epstein and Jeffrey Friedman devoted an entire film, the audacious and imaginative “Howl,” to the story around (and the illustration of) a single Ginsberg poem in 2010.

“Kill Your Darlings,” an upcoming Sony Classics release, is more conventional, but director John Krokidas has found an intriguing murder story on which to hang a tale of Ginsberg, Lucien Carr, William Burroughs, Jack Kerouac and the birth of a revolutionary literary movement. Radcliffe bears little resemblance to what Ginsberg came to look like, but he is adept at filling in the character of a timid (and closeted) outsider who finds his voice in the growing seeds of jazz-inspired freedom sown by the charismatic Carr (Dane DeHaan), whose admirers also include the tortured David Kammerer (Michael C. Hall).  Ben Foster is priceless as Burroughs, with a dead-on impersonation of Burroughs’ voice. 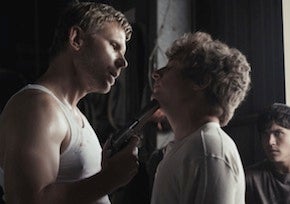 “We Gotta Get Out of This Place”
Movies can start with a script, a story idea or a few characters – or in this case, a location. Inspired by the look of a giant cotton gin in Texas, producers Brian Udovich and Justin Duprie cooked up this contemporary film-noir thriller about three 20somethings forced to pull off a heist, with a lengthy final section set inside that huge structure.

When one character in an opening scene recommends a Jim Thompson book to another, you know what you’re in for: folks in over their heads in a brutal world of petty criminals, corrupt lawmen, casual sadism and wall-to-wall setups and double crosses. The film tries to bring a touch of wit to the hard-boiled genre, and succeeds enough of the time (William Devane has delicious fun in a cameo) to make it stand out from your usual noir homages, even if the ending (spoiler alert!) is a little too soft-boiled for the likes of Thompson. 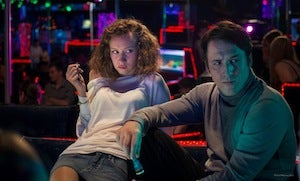 “Break Loose”
A Russian crime drama from director Alexey Uchitel, “Break Loose” follows a few members of a police force who grow tired of rounding up protesters and drunks, and try to take down a crime kingpin with friends in high places. To complicate matters, one of them is also sleeping with the kingpin’s girlfriend, which leads to an endless string of beatings, stabbings, threats, etc.

Uchitel, whose film “The Edge” was the Russian Oscar entry in 2010, has a knack for dark, brutal, fast-paced violence, and for creating an all-encompassing mood of dankness and corruption. It’s not the most pleasant way to spend 85 minutes, and at times all but the most hardened crime-thriller adrenaline junkies may find it oppressive … but then, that’s probably the point. 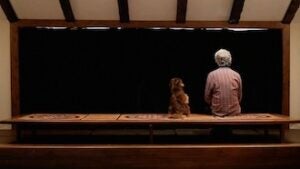 “Closed Curtain”
Director Jafar Panahi’s daughter has said that the Iranian director’s new film is “more a piece of art than a film” — but despite her disclaimer, “Closed Curtain” is clearly more of a movie than last year’s “This Is Not a Film,” which was essentially a filmed monologue in which Panahi, who is under house arrest and officially forbidden from making movies because of “propaganda against the state,” talked about the movie he’d like to make if he were allowed to make movies.

“Closed Curtain” channels the melancholy Panahi said he feels into a dense, surprising and resonant story about an Iranian screenwriter who shuts himself up in his house after fighting with authorities who are confiscating and killing dogs for being “impure in Islamic society.” The film, which won the screenwriting award at Berlin, gets very meta, with Panahi himself eventually appearing as his work explores the despair that comes with isolation, and the very idea of making movies without being able to fully engage in the filmmaking process.
At times the film gets obvious and at times it’s tangled and opaque, but “Closed Curtain” is also a fascinating, riveting emotional drama.

“The Past”
Iranian director Asghar Farhadi has a significantly better relationship with the state than does Panahi, and two years ago he brought Iran its only Academy Award for his film “A Separation.” With his followup, which premiered in competition at this year’s Cannes Film Festival, he’s retained that film’s leading man, Tahar Rahim, added another Iranian actor, Ali Mosaffa, and the French actress Berenice Bejo (“The Artist”) and set the entire movie in France, as an Iranian man returns to his wife’s house to sign divorce papers.

Farhadi is a quietly assured filmmaker with a marvelous knack for family drama, and the film moves slowly and deftly through a series of revelations that change the nature of the story, and of what we’re seeing. As the film nears its end, the revelations eventually begin to seem like contrivances, but Farhadi is such a master of domestic drama and its society implications that it’s easy to focus on the feelings rather than the mechanics.