For Pixar, and particularly for its “Toy Story” franchise, finding promotional partners and merchandise tie-ins is essentially a no-brainer. But that doesn’t mean the process is always smooth.

In fact, that process can be fraught with peril, “Toy Story 3” associate producer Nicole Paradis Grindle pointed out at a Sunday afternoon panel that took place on the 20th Century Fox lot as part of the Producers Guild of America’s Produced By conference.

The panel, titled “Pixar: The Care and Feeding of a Landmark Franchise,” covered the making of “Toy Story 3” and the creation of attendant DVD materials, videogames and amusement park attractions. But after Grindle introduced the panel, Pixar producer Galyn Susman focused on the tortured development process for a TV spot Pixar created to advertise the extensive promotional deal between “Toy Story 3” and Target, which is selling more than 100 “TS3” items, including almost two dozen exclusives, in its stores. 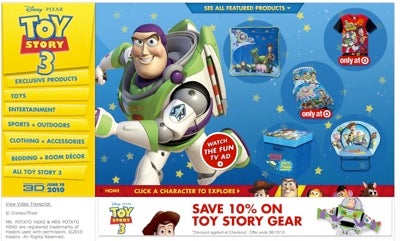 “Promotional partners like that are in, they paid all the money, and they’re entitled to get what they want,” she said. “But we’re fanatical about not breaking the rules of the world of ‘Toy Story,’ so it can get tricky.”

According to Susman, Pixar and Target went through seven versions of the ad and six months of tinkering before they could agree upon a version that gave the retailer what it wanted without violating the rules of the “Toy Story” universe.

Here’s the breakdown, as Susman presented it:

1) Target’s original idea. The retailer started by proposing a commercial in which a mom goes to Target and comes home with a bag that contains, to everybody’s excitement, Buzz Lightyear and Woody.

The problem: “If you know anything about our world,” says Susman, “you know that you can’t buy Buzz and Woody. They are owned by a boy named Andy.” Hence, any commercial that depicts the purchase of the actual Buzz and Woody at Target is simply not possible.

2) Pixar’s first counterproposal. The company came up with an alternative in which mom goes to Target and brings back a bag of toys and things. Instead of bringing “Toy Story” home, she’s bringing stuff home to the “Toy Story” characters, who get all excited about the new loot.

The problem: Target didn’t like the idea of mom bringing home other merchandise, because to them the whole point is to sell “Toy Story” toys. 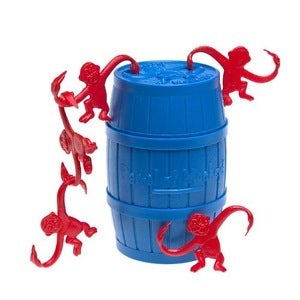 3) The Monkey option. Pixar storyboarded an alternative – this time, the bag that mom brings home contains a Barrel of Monkeys, a toy that is included in “Toy Story.” “We all thought the Barrel of Monkeys was really funny,” said Susman. (Note: a lot of people at Pixar, definitely including "TS3" director Lee Unkrich, are very fond of monkeys and apes.)

The problem: Target didn’t think a Barrel of Monkeys was funny. And they didn’t even remember that the toy was ever used in any of the “Toy Story” films.

4) “Toy Story” toys. This time around, Mom buys a bag of “TS3” toys, and brings them home … where Buzz and Woody and crew find themselves face-to-face with their doppelgangers.

The problem: Too creepy.

5) The toys themselves go shopping.   A breakthrough.  Forget about mom doing the shopping — this time, Pixar drew up an ad in which the “TS3” gang decide that they need stuff from Target: batteries, a new doghouse, a toothbrush … They jump into a Target cart pushed by a human kid, and off they go.

The problem: “John [Lasseter] and Lee [Unkrich] had big problems with this one, because it breaks the prime rule of ‘Toy Story,’” said Susman. “It has the toys alive and moving in front of a human, and they never do that.”

6) The toys go shopping, but more stealthily. This time they hitch a ride on the bottom of Target carts – which they reach by hiding behind a conveniently placed shrub, so that the humans don’t see them.

The problem: “Target thought it was neither fish nor fowl.” All of the mock-up ads had taken place against a white background, so the retailer didn’t like the idea of the shrub suddenly appearing in what was supposed to be the inside of a Target store. The concept could conceivably work if the toys were able to hide behind a counter or fixture of sorts, but the “Toy Story 3” animators – who, after all, were busy trying to finish the movie – didn’t have time to render the interior of a Target for the commercial.

7) The final ad. The shrub is gone, but no humans are in sight to necessitate hiding. This time, it’s cowgirl Jesse pushing the cart. Pixar shrugs off the potential implications (how are they going to say hidden when surrounded by other customers?), and Target likes it.

In the end, said Susman, the process required four-and-a-half months of back-and-forth between Pixar and Target, followed by six weeks of production.

CORRECTION: The original version of this story stated that the presentation was made by "Toy Story 3" associate producer Nicole Paradis Grindle.  While Grindle led the Pixar presentation, the segment dealing with the Target ad was presented by Pixar producer Galyn Susman.