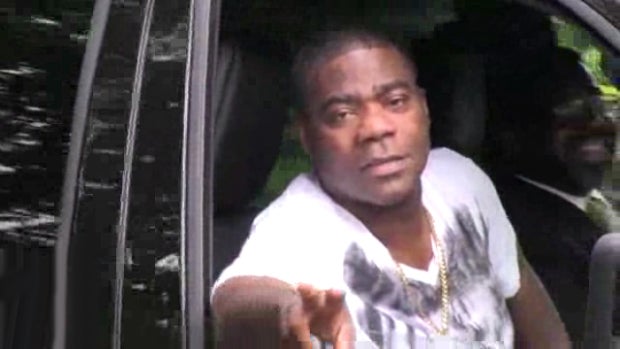 Walking with the help of a walker and an assistant, Tracy Morgan nonetheless showed signs of positivity, throwing a big smile and the peace sign to reporters camped out in front of his house as he got into a car.

In a video captured outside Morgan’s home on Monday, the comedian seems to struggle with walking and getting into his vehicle, but then gives spectators a sign that he’s in good spirits. When he drives past the applauding throng of supporters, he confirms, “I’m okay. I feel strong. I love you, thank you so much.”

On June 7, Morgan was involved in a multiple-vehicle car accident that left him in critical condition and killed 63-year-old comedian James McNair, who performed as Jimmy Mack. Four others in Morgan’s vehicle were also hospitalized when Wal-Mart truck driver Kevin Roper allegedly fell asleep at the wheel.

As of July 12, Morgan left the rehabilitation center and has continued his recovery at home. Last Thursday, Morgan filed a lawsuit against Wal-Mart over the fatal car accident that also injured Ardley Fuqua, Jr. and Jeffrey Millea.

Roper has pleaded not guilty to death by auto and assault by auto charges.