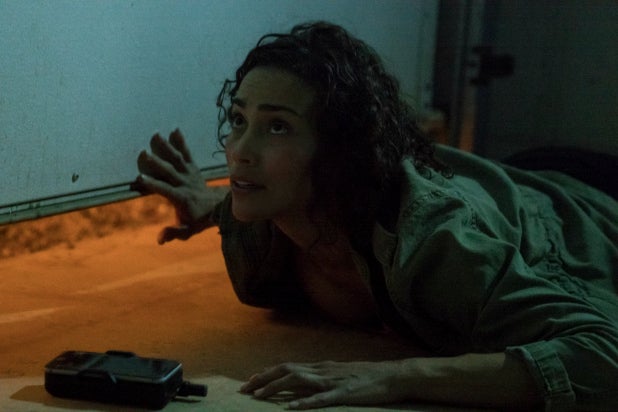 Not to be confused with Steven Soderbergh’s award-winning film or the acclaimed miniseries upon which it was based, “Traffik” is a thriller about human trafficking that mistakes an overwrought story for an important one.

Writer-director Deon Taylor (“Meet the Blacks”) touches upon some interesting and even occasionally relevant ideas in his film about an investigative reporter and the biker gang that will stop at nothing to protect its secrets, but even the fierce dedication of Paula Patton and Omar Epps doesn’t make those ideas coalesce into more than window dressing for the tawdry thriller they’re hung upon.

Patton plays Brea, an investigative reporter who learns on her birthday that the story she’s been working on for months was scooped by a fellow reporter at the behest of her editor, and subsequently she may soon lose her job. “Nothing takes months,” argues Mr. Waynewright (William Fichtner).

John (Epps), her mechanic boyfriend, attempts to divert her attention by planning a weekend getaway at a palatial chateau in the mountains for the two of them, where he plans to propose. En route they stop at a gas station where Brea encounters a mysterious young woman named Cara (Dawn Olivieri, “Bright”) in the bathroom, while John has a violent encounter with some bikers that’s thankfully interrupted by the arrival of the local sheriff (Missi Pyle).

Shaken by their experiences but thrilled at the prospect of some alone time, Brea and John arrive at the house, and John plots the right moment to pop the question. But not long after christening the infinity pool, they’re joined by The Worst Friends In The World, Malia (Roselyn Sanchez, “Devious Maids”) and Darren (Laz Alonso), who crash their romantic getaway, and thanks to their own relationship problems, instigate a rift between the two lovers.

Before peace can be restored, however, Brea discovers a satellite phone in her bag containing dozens of photos of young women. Recognizing the images as evidence of human trafficking, Brea insists they call the authorities; but when Cara turns up at the front door of their house, backed by some of the bikers and asking for the phone, the vacationers are forced to work together to escape the clutches of their invaders before becoming the next victims in what they soon discover is a multifaceted network of criminal activities.

It’s kind of hard to know where to begin with what’s wrong in “Traffik,” a movie where every scene takes about twice as long as it feels like it should, and the characters far too often make an escalating series of implausible and/or stupid decisions. Brea certainly wins audience (or at least reporters’) sympathies early by clashing with her editor over journalistic integrity at the possible cost of her job, but how then can she be so naïve, not to mention inert, when a very clearly drug-addled woman looks plaintively at her during a fleeting moment of privacy between them that gets interrupted by a menacing biker? “I didn’t want to butt in” is her later rationale, but the scene goes on far too long for it not to be abundantly clear what this poor woman needs, much less for her not to even ask, “Are you OK?”

Meanwhile, even if John feels like a perfectly understated partner for her, why in the hell are they friends — like, “go out together for Brea’s birthday dinner” friends — with Malia and especially Darren? In less than two minutes, he denigrates John’s job, almost spoils his surprise proposal, and defends openly ogling the waitress to John in front of his own wife.

And that’s before he shows up at their vacation house a day early, accuses Brea of wanting to report the phone to the authorities “to get a scoop,” and then inexplicably dredges up some old romantic business that occurred before she ever met John. Alonso is a charismatic actor, but there’s rakish and there’s just being an asshole, and as the unfortunate catalyst for a lot of superfluous drama, Darren is unmoored from anything remotely believable, or likable.

Patton serves double duty as a producer on the film and it’s clear she believed in this story, or at least what telling it could do for her credibility as an actor. But evidenced both by her successes (“Déjà Vu,” “Mission: Impossible – Ghost Protocol”) and failures (“Baggage Claim”), she needs a strong director who will shape her deep feelings into something compelling and coherent, and Taylor seems either preoccupied by the importance of his story, or so wowed by the volume of what she is doing on screen that he never bothers to do more than sort of watch, astonished.

It isn’t that Patton doesn’t deliver something interesting, it’s that it’s assembled so clumsily that all of her shivering and hesitation dominates the moments of decisiveness and strength that should have made an impression.

Any good reporter knows not to come up with a thesis and then look for evidence to support it, but rather to follow a story and see where it leads you. Like Brea’s, Taylor’s heart is in the right place, but they both need to learn how to focus, and both could probably also use a better editor. But then again, who can blame Taylor for luxuriating in the dynamic, nightmarish images he captures with the help of the great cinematographer Dante Spinotti? The two of them work effectively together to create a sense of ominousness and vulnerability that lifts the film more than it deserves.

That said, those imaginative flourishes don’t always match with the performances, or the musical choices — including a gobsmacking use of Nina Simone’s “Strange Fruit” during a scene of human trafficking — but Taylor definitely has an eye for intriguing juxtapositions. It’s just a shame that too many of them in “Traffik” are bad ones.