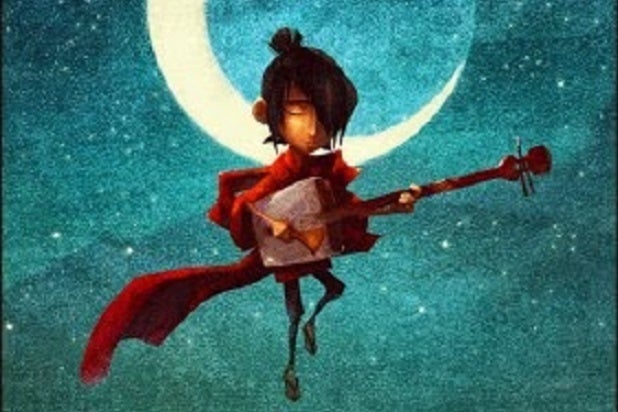 Travis Knight may be following in the footsteps of people like Pixar’s John Lasseter, Illumination’s Chris Meledandri and, way back when, Walt Disney himself. The CEO of Laika animation is also a filmmaker for his company – and Knight’s directorial debut, “Kubo and the Two Strings,” opened on Friday and is basking in the largest amount of praise for any Laika movie since the company’s first, “Coraline,” in 2009.

Knight, the son of Laika owner Phil Knight, has been working in animation since he joined Laika’s predecessor, Will Vinton Studios, as an intern. (Before he devoted full-time to animation, though, he had a brief stint as a rapper, releasing one album in 1993.)

TheWrap spoke to Knight at Laika headquarters in Portland, Oregon, where the company has outgrown a huge warehouse full of offices and soundstages and is now expanding into an adjacent building.

How did “Kubo and the Two Strings” come about?
It started about a half decade ago. We were still in production on “ParaNorman” at the time. Always for me, and for everybody here as well, there’s an inherent restlessness, a search for the new cool thing. We don’t want to repeat ourselves. We want to find a new story that we can tell, and it was through that prism that we started working on “Kubo and the Two Strings.”

The original idea came from our character designer, Shannon Tindell, a brilliant artist who I worked with on “Coraline.” He came up with this really cool idea for this sweeping samurai epic. The mind just explodes at the idea of a big stop-motion fantasy epic. We started with that germ of an idea, and over a period of time a small group of us fleshed it out and figured out what bigger issues the story can support, and what deeply personal things you can weave into the narrative to make it resonant.

What was attractive about the idea of a fantasy epic?
For me as a kid, I grew up loving and being obsessed with big fantasy epics. I loved “Star Wars,” I loved Tolkien, Greek and Norse mythology, L. Frank Baum and “Lone Wolf and Cub.” And this story allowed us to paint with those same colors, to aspire to that pantheon of epic fantasy.

So that was the starting point. And here we are five years later, we have a movie.

But when you start with the idea of a big fantasy epic, stop motion is hardly the technique that springs to mind.
It’s kind of stupid, really. It’s kind of absurd. There are definitely limitations to the medium, just inherently. There are things that it struggles to do. But on every movie, we’ve learned how to push the medium to its breaking point, and then push beyond it.

So that was the challenge that I set for the team at the beginning – to do sort of a stop-motion David Lean film, a Kurosawian myth in miniature. I think stop motion has a warm, human quality to it by virtue of how it’s made. But many stop-motion films historically have looked like they’re shot on a gussied-up tabletop with a camera on a tripod, because effectively they are. They look small. And the idea of making a small-scale film look like a large-scale epic that’s shot on a sweeping, endless vista was kind of absurd on its face. But we put that challenge to our crew and we just figured out how we were going to do it.

We’ve got such a wide array of techniques – people who are creating technology and people who are doing things the way George Melius was doing when he sent rockets to the moon. It’s that combination of craft and technology – we take the raw and the refined and we merge them together. At the outset, what might have seemed impossible because you have a million tasks in front of you, little by little you chip away at it.

Were there specific challenges that made you think, how the hell are we doing to do this?
[Laughs.] There were a lot of them. The obvious stuff, big action sequences — those are really challenging to do in stop motion in a way that feels natural. With live action, you shoot a ton of coverage and then winnow it down in the editing bay. In stop motion, you can’t shoot coverage. Everything you shoot has got to be targeted. You have to do a ton of planning, but it has to look spontaneous when you’re watching it in the movie.

So we had to figure out, How do we keep the camera alive? We wanted to really make it look liberated, like a cameraman filming the action as it’s happening. And then the choreography of the action was tricky, because you have these puppets, but they have to be dynamic and active and have real kineticism. That’s not something the medium does particularly well, but again, we figured that out.

How?
At one point we consulted with a stunt guy to see how they would tackle this in live action, and then took some our cues from that. And I think the action sequences work extraordinarily well, better than I had hoped, given the limitations of what the medium are.

Also, a challenge that people might not expect was the refinement of the animation. The subtlety of the animation was something that I really wanted to capture in this movie. You need to feel the emotion of this kid and connect with his experience – because if you just think of these things as moving dolls, the whole emotional experience gets washed away.

It seems to me that Laika made big steps forward in doing stop-motion animation with “The Boxtrolls,” which was much more action-oriented than “Coraline” and “ParaNorman.”
Some of the stuff that we did on “Boxtrolls” was huge, and part of it was liberating the camera so it felt alive, so it didn’t feel like things are locked off. I think we had a huge breakthrough in how to shoot action on “Boxtrolls,” and we applied that on this one. It’s the benefit of having this team together for 10 years.

That’s a great and unusual thing about the crew that we have here. Historically, there has never been a group of stop-motion animators that has stayed together as a band like this. And we’ve kept the band together for 10 years. What that allows us to do is that with each film we learn some new technology or technical innovation, and it’s cumulative.

That said, most people don’t care how it’s done. They just want to be entertained. But for people who are fascinated by the making of film and how these things come together, which I was when I was a kid, there are some really great stories here.

I mean, I remember when I was a kid and they had a TV special on how they did the special effects on “Star Wars,” and it blew my mind.

So what pushed you in the direction of a low-tech medium like stop motion?
I loved animation as a kid, as most kids do. But there was something interesting to me about stop motion, I didn’t quite know why. I loved the Ray Harryhausen creature features, and as an adult I’ve tried to analyze why I found it appealing.
The best answer I can come up with is something I see with my kids. I see my son alone off in a corner and he’s playing with his action figures, and it’s imaginative play. He’s imagining this whole story and the inner life that these things have, coming up with these stories. And it’s such a cool thing to see what a primal part of ourselves that is.

For me, I think stop motion is evocative of that feeling. It’s imaginative play, it’s like seeing a child’s plaything brought to life. You see these things that are basically dolls or action figures somehow moving of their own volition, seeming to have an inner life. To see things that are crafted by hand feel alive is kind of magical.

Why did you choose this film to move from being an animator and the CEO of the company to also directing?
I think every artist eventually wants to direct, but when you’re directing it should be something personal. I saw so many parallels between Kubo and myself in my own life. In some ways, Kubo is me – he’s a storyteller, he’s a musician, he’s an animator in the way he brings these origami creations to life.

And the journey he goes through, crossing that Rubicon from childhood to adulthood, was so much like my own life that it felt like I could bring something unique to it.

Typically, Laika goes years between films – but here in your headquarters, you’ve expanded and have been working on your next film for some time. What do you see as Laika’s path from here? Are you planning to make films more quickly?
Yes, that’s right. We’ve always had the long-held ambition to be on an annual release schedule. There are a lot of issues with that when you’re working with stop motion -nobody who does stop motion has ever been able to do that before. But I think we are getting there. And that’s part of the expansion that we’re doing in the building will help us do that.

With each successive release, we’ve truncated the window between them. Between “Boxtrolls” and “Kubo,” it’s less than two years. And between “Kubo” and our next film, it’s going to be even less than that.

As our movies come out more frequently, I think people will cotton onto the fact that our movies will not be so easy to define. I think for a good long time between “Coraline” and “ParaNorman,” people’s shorthand talked about us as the company that did scary movies for kids. That’s certainly an aspect of it, and we’ve done our share of soaking bunk-bed mattresses with the films that we’ve done. But that is only one aspect of what we do, and “Kubo” is a completely different kind of film.

But does the model work financially? You don’t have Pixar or Disney-sized grosses, and these can’t be cheap movies to make.
They’re not cheap, but relative to our quote unquote competition, they’re cheap. I think it’s because we control our costs and make do with less. If you take the last three films we’ve done combined, it doesn’t amount to one Disney-Pixar film. They’re not cheap, but they’re a fraction of what a big CG film costs. That means our threshold for success is lower. But still, you have to perform decently.

I’m pleased with the performance of our films to this point. Obviously, we hope for more. I think any artist wants their art to be shared by as many people as possible, in addition to the financial model. But I’m very proud of where we are, and I think we’re setting ourselves up for more growth.