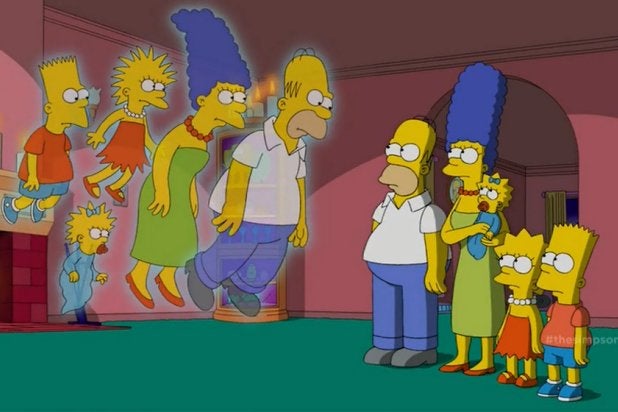 “The Simpsons” is a venerable television institution, and one of its most beloved franchises turned 25 this year. “Treehouse of Horror XXV” featured a nod to “A Clockwork Orange,” a trip to hell and a fun look back at how America’s favorite family began.

It was another strong installment with a memorable mashup across time in what has already been a strong season for Fox’s long-running animated comedy. “The Simpsons” kicked off the season with the highly-anticipated death of a minor character, while Springfield and all of its denizens appeared in the premiere crossover event of the year on “Family Guy.”

Through the two-plus decades it’s been on the air, “The Simpsons” have evolved slowly, both in their visual presentation, and even in some of their voice work. In particular, Dan Castellaneta’s take on Homer Simpsons has evolved from a gruff and angry man to the dopier by lovable buffoon we have today.

The evolution was on full display in the third short in the Fox animated comedy’s annual Halloween tradition. A haunting in the house leads to the summoning of the ghosts of a very familiar family. The Simpsons who emerge as specters might as well have stepped from their shorts on Fox’s “The Show,” where the family experienced their genesis in 1987.

It was a fond look back for long-time fans of “The Simpsons,” while younger fans could just enjoy the absurdity of watching the current Simpsons one-by-one commit suicide — except Maggie, with Groundskeeper Willie the top suspect.

As usual, the episode was broken into three segments, with the first dedicated to exploring Bart’s darker side. The prankster discovered that his penchant for troublemaking and evil schemes make him Hades’ star student, and so he officially transfers there.

The other bit was an elaborate parody of Stanley Kubrick‘s “A Clockwork Orange” that was so obtuse even Comic Book Guy had to admit at one point, “Even I forget what this is a reference to.”

It all led to the final moment, when “The Simpsons” paid homage to some of the other great animated projects of the modern era, including “Adventure Time,” “South Park,” “Archer,” “Despicable Me” and “The Lego Movie.”

See video: ‘The Simpsons’ Get LEGO-fied for Upcoming Episode

“The Simpsons Treehouse of Horror XXV” once again proves that the creativity in this 22-minute episode often surpasses the rest of the surrounding season. With no rules and no continuity to follow, the creators simply go crazy and throw everything they can think of into these episodes.

I’d argue that it’s just too bad we only get one of these experimental episodes per year, but it probably wouldn’t be as strong if they had to trot it out with any greater frequency. You could argue that’s the problem with the rest of the season most years.