Trevor Noah weighed in on the Supreme Court’s latest decision to limit the Environmental Protection Agency during Thursday’s “The Daily Show,” pondering what might be the thing to bring this “radical” Supreme Court to a halt.

“This is one of the most radical Supreme Courts in American history,” the late night host claimed. “They’re also imposing their power on a country that, for the most part, isn’t on board with any of it.”

Noah pointed out that there have been longstanding proposals to reform the Supreme Court, including expanding the number of justices and imposing term limits. However, he also wondered whether there may be other effective measures like “setting up a trap for Brett Kavanaugh.” 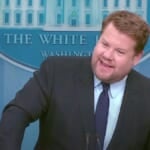 “You never know,” he said, as a photo of a trap advertising “free beer” appeared on screen. “It might work.”

Of course, Kavanaugh isn’t the only Justice responsible for these decisions. Noah added that he knew “from the moment that Amy Coney Barrett was sworn in, it was only a matter of time before the Supreme Court started restoring America back to its factory settings.”

The latest ruling on the EPA was particularly hard for Noah to wrap his head around.

“The Supreme Court ruled that the Environmental Protection Agency does not have the authority to protect the environment? So, what is their job now?” he wondered aloud. “Are they just gonna look at the environment and be like, ‘Oh sh—!'”

Watch a video of the full “Daily Show” segment above. 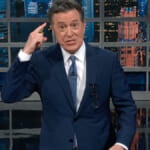