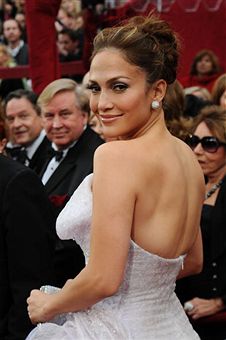 One day after dazzling on the Oscar Red Carpet, Jennifer Lopez got an award of her own as Los Angeles court ruled Monday that the actress would be able to keep her $10 million suit against her ex-husband and his business partner private and avoid the spotlight of a trial, at least for the time being.

Superior Court Judge William Fahey stayed any trial court action until the court of appeals rules on his previous denial of Lopez’ lawyer’s request for the dispute to go to arbitration. The action, against her ex-husband Ojnani Noa and former TV producer Ed Meyer, was filed to stop the making of a film based on the couple’s brief marriage.

Last fall, in the opening round of the case, Lopez — who was resplendent in Armani at the Academy Awards Sunday with her third husband, singer Marc Anthony — filed her lawsuit against Noa, to whom she was married for 11 months in 1997.

Lopez says Noa is violating clauses in  their 2005 post-divorce settlement  barring him from profiting from revealing information about the marriage. Lopez’s ex-husband and Meyers are seeking to make a film entitled “Escaping Cuba & Then the Mafia … How I Created Jennifer Lopez.”

The ruling was a reversal for the judge, who seemed inclined last week to separate the cases and allow Meyers defend himself at trial.

“We’re continuing to be restrained at this point,” Meyers told TheWrap after learning of the ruling. “Jennifer is stopping us from making the film we want to make and that’s going to damage us from creating a wide appeal product in the end.”

Terri Masserman, Noa’s lawyer, told TheWrap that she has “no comment on this at this time.” The office of John Lavely, Lopez’s attorney, did not respond to TheWrap’s request for comment.

Unless the Court of Appeal gets involved, the case is set to grind along in Judge Fahey’s courtroom on September 8, 2010 in downtown LA.