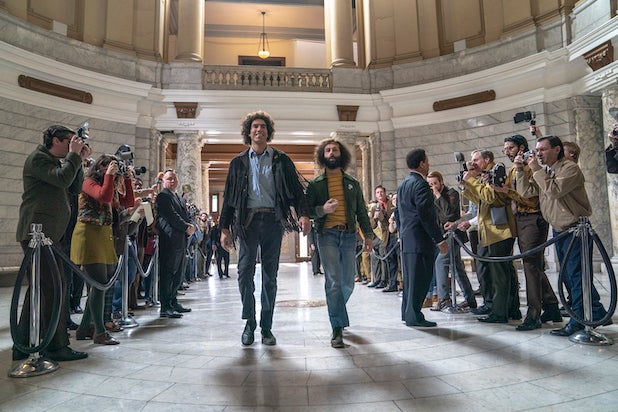 On paper, “The Trial of the Chicago 7” feels like it could be a bit of Aaron Sorkin’s greatest hits. The drama, which hits select theaters on Friday before heading to Netflix on Oct. 16, has lots of the qualities you can find in previous works that he’s written: politics (“The American President,” “The West Wing,” “Charlie Wilson’s War”), legal scenes (“A Few Good Men,” “The Social Network”) and, most of all, smart people talking fast (pretty much everything Sorkin has done).

But if “The Trial of the Chicago 7” is indeed full of the verbal pyrotechnics that can make Sorkin such an invigorating storyteller, the film is most notable for the way it goes in directions we haven’t seen from the writer and director. With its intricate editing and full-scale action sequences re-creating the riots at the 1968 Democratic Convention in Chicago, “The Trial of the Chicago 7” moves beyond Sorkin the writer of dialogue, or Sorkin the supplier of scripts to the likes of Rob Reiner, David Fincher and Danny Boyle, to Sorkin the filmmaker.

Sure, his dialogue has been visceral and urgent in movies from “A Few Good Men” to “The Social Network” to “Steve Jobs.” But in “Chicago 7” — only his second film as a director, after 2017’s “Molly’s Game” — he emerges as an assured filmmaker whose style can be as propulsive as his words.

Also Read: 'The Trial of the Chicago 7' New Trailer: Sacha Baron Cohen Will Give His Life for the Revolution (Video)

He’s also a playful filmmaker, because for a while it does seem as if this movie really is just going to be about the trial of the Chicago 7. The first few minutes provide a whirlwind introduction to all the characters as activists make plans to head for Chicago for the convention — but before they get there, and before the city unleashes its heavily armed police force to stop the peaceful demonstrations, the film suddenly jumps forward to five months after the convention. It skips the action and goes straight to the talk about the action, which seems like a very Sorkin thing to do.

But in the long run, that’s not what Sorkin does. We will, in fact, get plenty of action to go with the talk, but we’ll get it when he’s ready to give it to us, which is after we’ve come to know the characters and the stakes.

The characters, all real people, are a motley but fascinating crew: Tom Hayden (Eddie Redmayne) and Rennie Davis (Alex Sharp), the leaders of the very serious and mostly well-mannered Students for a Democratic Society; Abbie Hoffman (Sacha Baron Cohen) and Jerry Rubin (Jeremy Sharp), heads of the more anarchic Yippies, who use outrage and buffoonery to attract attention; David Dellinger (John Carroll Lynch), John Froines (Danny Flaherty) and Lee Weiner (Noah Robbins) from the National Mobilization Committee to End the War in Vietnam (The Mobe), a loose coalition of antiwar activists partial to large demonstrations; and Bobby Seale (Yahya Abdul-Mateen), a founder of the Black Panther Party who heads to Chicago to make a speech, not to participate in the planned demonstrations in the city’s Grant Park that turned into violent, nationally televised clashes with the police.

Then-President Lyndon Johnson’s Justice Department investigated and determined that the police were the aggressors and the protesters should not be charged with crimes, but that attitude changed with the election of Richard Nixon and the appointment of his new attorney general, John Mitchell — who, as played by John Doman, tells young prosecutor Richard Schultz (Joseph Gordon-Levitt), “I want to bring back manners!” In 1969, eight defendants were indicted and charged with conspiracy and crossing state lines to incite a riot.

Also Read: 'The Whole World is Watching' in First Teaser for Aaron Sorkin's 'The Trial of the Chicago 7' (Video)

And no, the trial doesn’t do a damn thing to bring back manners. Seale, who had no business being lumped together with the other defendants, ends up bound and gagged in the courtroom because he insists on having his own lawyer; Hoffman and Seale, merry pranksters whatever the cost, openly mock the judge at every opportunity; attorney William Kunstler (Mark Rylance) tries in vain to manage the squabbling defendants; and the judge, Julius Hoffman (Frank Langella), is hostile to and biased against the defendants to the point of absurdity.

The courtroom scenes, for which Sorkin made use of the actual trial transcripts, are a complete circus; they’d be funny if they weren’t such a brutal miscarriage of justice.They also give the actors a banquet to feast upon. Rylance stands out because he’s the most wry and (usually) understated, Langella because he imbues the judge with bottomless depths of self-righteousness, Abdul-Mateen because he captures the humanity that the court did everything possible to strip from him. (His most wrenching scene, though, takes place out of the courtroom, in a prison.)

As Abbie Hoffman and Jerry Rubin, the most theatrical and outrageous of the defendants, Cohen and Strong have the craziest crowd-pleasing moments, but they’re also burdened with big ’60s hair and thick East Coast accents that threaten to make them more cartoonish than they want to be. Hoffman, at least, has an arc that ends up with him being smarter and sharper than we originally realize; Rubin, on the other hand, comes across like a sad-sack loser at times, as when he moons over a woman he was flirting with who turns out to be an undercover FBI agent.

If the trial was the sole focus, “The Trial of the Chicago 7” would be both a hoot and a sobering look at American jurisprudence. But Sorkin uses the structure of the trial to lead us through the protests and what really happened in Grant Park. We get those details in flashes, with the riots themselves playing out in courtroom testimony, in a standup routine delivered by Hoffman in a nightclub, in black-and-white archival footage and in scenes shot by Sorkin and the gifted cinematographer Phedon Papamichael (“Nebraska,” “Ford v Ferrari”) in the same place where the actual incidents took place.

The action cuts back and forth between the various tellings; the events around Grant Park are a centerpiece of the film, and the most complex and visceral sequence that Sorkin has ever directed. But the orchestrated frenzy sets the stage for a much different, much quieter sequence, when Michael Keaton shows up for a couple of scenes as John Mitchell’s predecessor as attorney general, Ramsey Clark. With effortless command, Keaton steals the show by slowing the rapid-fire Sorkin dialogue down to a crawl; he makes you lean in for every word.

But Keaton is a delicious detour, not a finale. This is a movie that relies a lot on accelerating tension, on build-it-up and stretch-it-out sequences with similar pacing, on revealing a little more each time we return to the park or the streets. And in between the courtroom scenes and the flashbacks and the growing tension between Tom Hayden and Abbie Hoffman, it’s a thoroughly satisfying drama whose emotional climax hinges on an implied possessive pronoun, of all things.

Leave it to Aaron Sorkin to show that he can be a damn good action director, and then bring it all down to the words.

And leave it to Sorkin — whose only other film as director, “Molly’s Game,” felt prescient in its portrayal of predatory men in Hollywood and beyond — to catch the mood of 2020 with a film he began working on many years beforehand. At a time of so much focus on police brutality, and a time when protest is being demonized as the election approaches, this story set 50 years ago feels oddly, frighteningly vital.