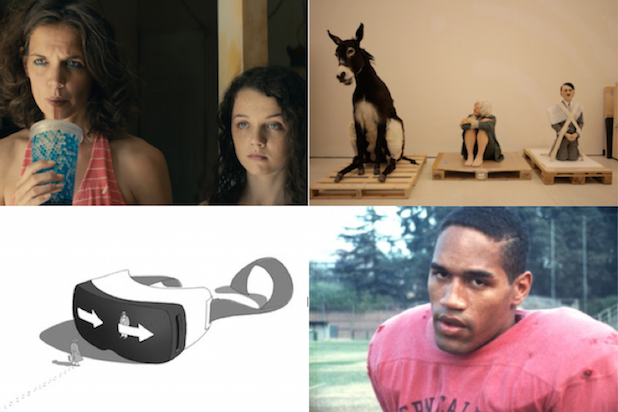 When the 2016 Tribeca Film Festival kicks off on Wednesday night, its first job will be making sure that the movies it is showing get as much attention as the movie it isn’t showing.

After all, even in a year with a strong and varied lineup, many of the Tribeca headlines in the last few weeks have been about “Vaxxed: From Cover-up to Catastrophe,” a controversial documentary linking childhood vaccinations to autism.

TFF initially announced that the film would be part of its “After the Movie” series of films followed by panel discussions – and when critics pointed out that the film’s director and central figure, Andrew Wakefield, had been thoroughly discredited and had his medical license revoked, Tribeca co-founder Robert De Niro issued a statement reading, in part, “Grace [Hightower, De Niro’s wife] and I have a child with autism and we believe it is critical that all of the issues surrounding the causes of autism be openly discussed and examined.”

But the day after his initial statement, Tribeca canceled the screening. “After reviewing it over the past few days with the Tribeca Film Festival team and others from the scientific community,” De Niro said in a second statement, “we do not believe it contributes to or furthers the discussion I had hoped for.”

The mess put Tribeca in the spotlight, and raised the question of whether film festivals should be responsible for vetting the accuracy of the kind of advocacy documentaries they all program. And while Wakefield charged that TFF was engaging in censorship, most of the scientific and documentary communities applauded the festival’s prompt response, even as it killed a screening that would no doubt have drawn a full theater of passionate moviegoers.

So what’s still on the slate for the 2016 Tribeca Film Festival, which begins on Wednesday night with the documentary “First Monday in May” and continues through April 24? Here’s some of what Tribeca will bring to lower Manhattan for the next week and a half:

Female directors
In a record for Tribeca, this year’s festival includes 39 features, more than a third of the festival’s total, and 14 shorts that were either directed or co-directed by women. The number includes films by Katie Holmes (“All We Had”), Sophia Takal (“Always Shine”), Liza Johnson (“Elvis & Nixon”), Alma Har’el (“LoveTrue”) and Mia Wasikowska (a segment of the anthology film “Madly”).

Television
Yes, it’s a film festival — but these days, even film festivals have to recognize that much of the most exciting filmed entertainment is done for TV. Tribeca has embraced that idea with an extensive “Tribeca Tune In” program, which will include premieres of pilots or episodes of TNT’s “Animal Kingdom,” AMC’s “The Night Manager,” HBO’s “The Night Of,” Comedy Central’s “Time Traveling Bong” and History’s “Roots,” among others.

Other special television-related events include episodes and conversations with the cast of “Broad City,” “Grace and Frankie” and “Full Frontal,” a tribute to “The Good Wife,” a retro screening of the final episode of “Six Feet Under” with live commentary, and a marathon screening of ESPN’s upcoming nine-hour documentary about the O.J. Simpson trial.

Also Read: Sarah Paulson Finds OJ Guilty: 'It Could Be Nobody Else' (Video)

Interactivity
TFF has long showcased other kinds of content that isn’t designed for a movie screen, but this year its TFI Interactive, Storyscapes and Virtual Arcade programs will be more extensive than ever.

TFI Interactive will be a daylong program that includes contributions from directors Werner Herzog and Laura Poitras and companies like Google Creative and IBM — along with a potentially terrifying “Famous Deaths” installation in which viewers put themselves in mortuary freezers to “experience the final moments in the lives of famous people through sounds and scents.”

For those not quite so fearless, the Storyscapes program will offer “6X9,” which uses virtual reality to merely immerse viewers in the experience of solitary confinement; and “SENS,” a VR maze and the first adaptation of a graphic novel into virtual reality.

Art movies
No, we don’t mean esoteric films designed for small audiences that go to arthouse theaters, although Tribeca will no doubt have plenty of those.

Instead, the festival will have an unusually large number of films about art and artists, beginning with its opening-night screening of “The First Monday in May,” Andrew Rossi‘s documentary about the Metropolitan Museum of Art’s 2014 exhibit devoted to Chinese and Chinese-inspired costume design, and about its annual Met Gala that year.

More controversy
Typically strong on documentaries, Tribeca doesn’t need “Vaxxed” to start conversations. The festival’s other nonfiction films include the issue-oriented docs “Betting on Zero” (hedge fund CEO Bill Ackman’s crusade against Herbalife), “Do Not Resist” (the militarization of local police forces), “Untouchable” (the effectiveness of sex offender laws), “I Voted” (the perils of electronic voting), “My Scientology” (journalist Louis Theroux’s comic look at the controversial religion) and “Southwest of Salem” (the conviction of four women in a trial rife with homophobia and religious panic).

Will some of those films start arguments and prompt discussions? No doubt. Will they have the fervor of the battle over “Vaxxed?” Stay tuned.