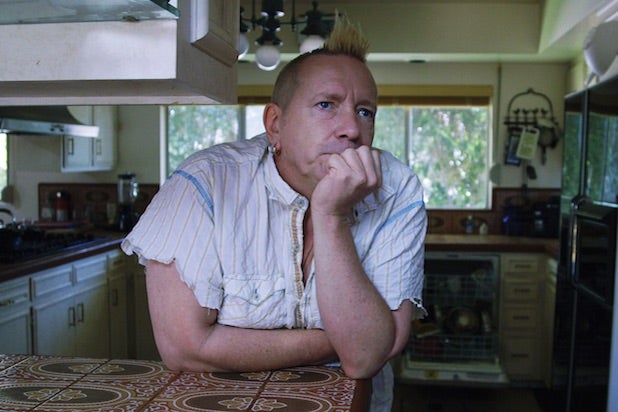 TWhat is the world coming to when Johnny Rotten is the cheeriest, most positive person in the room?

That’s the way it seemed on Friday night at the Tribeca Film Festival, when the documentary “The Public Image Is Rotten” had its world premiere, and John Lydon — known for spewing venom and spittle in equal measure during his days in the Sex Pistols — followed the screening with a slightly unhinged Q&A in which most of his answers fairly reeked of positivity and light.

He talked about the importance of books, about how the best kind of political statement is to “mean no harm to your fellow human beings,” about the twin grandsons he and his wife of four decades have raised since the boys were 14.

And he praised the movie effusively, though he did single out one part that he found difficult to watch: “I didn’t like the recent footage. I’m all f—ing wrinkled and fat!”

Oh sure, he took a few shots at music made simply for profit as “a vacuous waste of your energy.” But he also insisted that everyone who accomplishes anything in music “has my complete love and support” – before adding with a grin, “except Sting.”

He was Mr. Warmth, albeit with a twinkle and a foul mouth. And if that seemed a little jarring given his public persona, he’s well aware of the disconnect. “People think I’m hard as nails,” he said at one point. “I’m not. I’m soft as butter.”

Upending expectations, though, has been Lydon’s stock in trade for decades now.

We got to know him as a cartoon character who almost accidentally turned into a revolutionary. A provocateur who somehow became an artist. A lowlife ruffian immortalized in a Neil Young lyric: “The King is gone but he’s not forgotten/This is the story of Johnny Rotten.” And elsewhere in that song: “It’s better to burn out than to fade away.”

The thing is, Johnny Rotten did kind of fade away, at least in mainstream pop culture. The Sex Pistols put out one album, quite deliberately horrified lots of people, changed the face of rock ‘n’ roll and then broke up after a San Francisco concert that ended with these words from Lydon: “Ever get the feeling you’ve been cheated?”

But he didn’t really go away, which is the whole point of “The Public Image Is Rotten.” Lydon went on to make bold, transgressive and adventurous music in the band Public Image Ltd. (or PiL) — and while it’s hard to get people to be interested in watching you mature after becoming an iconic brat at the age of 20, his output was beloved by rock critics, post-punks and musicians, at least for a couple of albums.

Lydon is now 61, and PiL, which stopped making records in 1992, has come back as a touring and recording entity for most of the last decade. That’s what the movie is about: Though its title refers to the name that Lydon hasn’t used since the Sex Pistols broke up in 1978, director Tabbert Fiiller’s film is a painstaking chronicle of PiL, with only the barest mentions of the band that made Lydon infamous.

That approach will no doubt be rewarding for PiL diehards and completists, but it’s problematic for the rest of us. (I say this as someone who likes PiL’s output quite a bit, and saw a couple of astounding shows by the band early in its career.)

“The Public Image Is Rotten” opens with a bit of music – including a snippet of “Anarchy in the UK,” the only Pistols song heard in the film – and then goes into a chronology of Lydon’s life, notably including the meningitis-induced, amnesia-causing coma he fell into at age 7. But when it gets to the mid-1970s, the film suddenly skips ahead a few years to the post-Pistols era, a jump that is initially confusing and one that leaves a real hole in the story. (The 2002 Sex Pistols reunion tour also goes unmentioned.)

PiL’s music was challenging, sometimes poppy but often discordant, borrowing bass lines from reggae and dub as Lydon cycled through dozens of members. And that makes it disappointing that the film about PiL is something the band itself rarely was: conventional.

Fiiller takes an album-by-album, year-by-year approach, full of talking heads going into lots of detail and enlivened by video footage from most of the key periods in the band’s life. The filmmaking never approaches the vitality of the music it’s chronicling; instead, it’s a straightforward trip through a story that probably deserves a weirder, wilder approach.

Or maybe it shouldn’t be weirder and wilder. As the film goes on, the portrait that emerges of Lydon is a far cry from the guy we thought we knew. The man we see onscreen, discussing his career in his kitchen while his wife hides behind a closed door somewhere else in the house, comes across not as a threat to the republic, but as a nice, sensible bloke with a funny haircut and an odd fashion sense.

But you know what? We live in an age when outrage and anger is the coin of the realm; maybe a kinder, gentler Johnny Rotten is as revolutionary now as the firebrand we saw back in 1976.

If that’s the case, “The Public Image Is Rotten” might just be a good start. And Lydon says we should stay tuned.