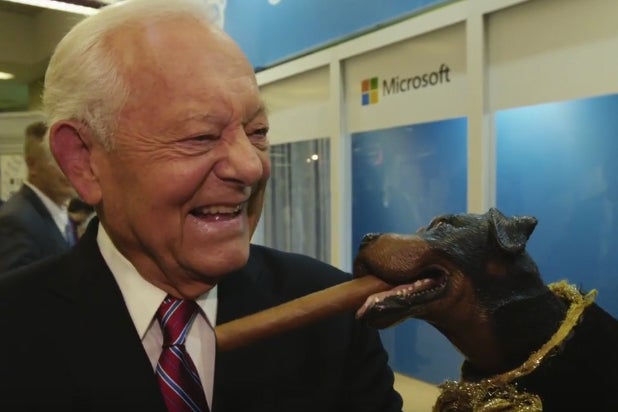 Robert Smigel, the man behind Triumph the Insult Comic Dog, used a Roger Ailes lookalike to gain access to certain areas at the Republican National Convention last month, the comedian revealed on Friday.

The puppet will star in a new comedy special for Hulu revolving around the ongoing presidential election, and Smigel revealed during his panel at the Television Critics Association summer press tour that one of the special’s guests will be a Roger Ailes impersonator.

“I actually gained more access,” he said. “I was like, ‘I’m with Roger Ailes,’ and they actually let me in.”

The comedian explained that the Ailes lookalike was brought in for a parody of NPR’s self-defense classes for reporters heading to the RNC. “One of the reporters was Crystal Ball from MSNBC,” Smigel said. “So Triumph suggests, ‘What about the other potential dangers?’ And then we brought a Roger Ailes lookalike into the room.”

Smigel, as Triumph, opened the panel with a eyebrow-raising joke about the Duggar family’s recent scandals, but the comedian explained that there are some lines he’s unwilling to cross.

“There are things that I’ve always felt were too much,” he said, explaining that he was put off by a trend in the ’90s that had comedians mocking the deaf or handicapped. “That always seemed needless … I don’t like hitting on women’s looks, particularly.”

Other jokes, though, don’t make the cut for other reasons. One of the bits in the upcoming specials — which Smigel said plays like an 80-minute string of sketches — includes a carnival for Republicans at the RNC last month, but they weren’t able to get one of the games camera-ready in time.

“We were going to have a claw machine … that just had a pile of guns in it,” Smigel said with a laugh, adding, in the voice of Triumph, “Come on, don’t be a pussy. Go for the big one.”