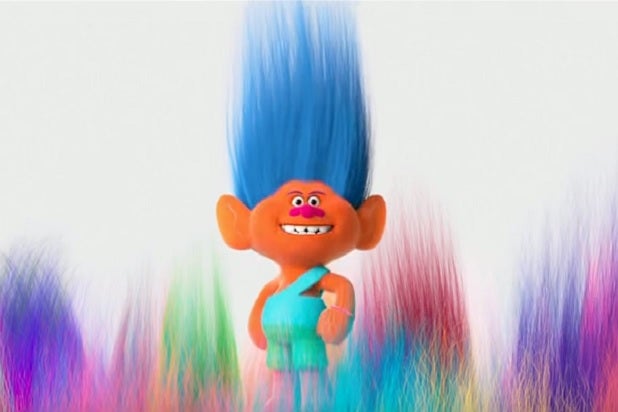 Dreamworks Animation showed off new footage of its upcoming “Trolls” film at San Diego Comic-Con Thursday morning in front of a packed house full of fans wearing hats made to look like Troll hair.

The film, based on the famous Troll dolls, sees the peppy and upbeat Trolls face off against their ideological enemies, the depressed and cynical Bergens — who can only find happiness by eating Trolls.

The 16 minutes that were shown in Hall H were excerpted from the beginning of the second act of the film, “Trolls” co-director Walt Dohrn said. The Bergens have attacked the Trolls, and heroine Poppy (Anna Kendrick) takes it on herself to strike back.

The clip opens as Poppy tries to recruit the local paranoid recluse, Branch (Justin Timberlake), to help in her quest. He’s spent years building a bunker to protect himself from Bergen aggression.

She begins her quest to take down the Bergens with a musical number in which Kendrick sings “Get Back Up Again,” a great single-quality track that demonstrates the impossibly resilient optimism of the Trolls.

Poppy eventually runs into a roadblock, in the form of some spiders — but Branch, of course, comes to her rescue at the perfect moment.

The clip also showed off a few covers of that will be on the soundtrack: “Sunshine in a Bag” by The Gorilla, sung by the Bergens, and Poppy’s rendition of Simon & Garfunkel’s “Sounds of Silence.”

The Dreamworks presentation was the first of the week in the famed Hall H, and featured stars Kendrick and Timberlake, as well as Dohrn, director Mike Mitchell and producer Gina Shay.

“Getting to go in and say these weird lines about cupcakes and rainbows,” Kendrick said, “It felt like I just got to play inside this tiny pink 6-inch Troll.”

Kendrick and Timberlake said they’ve been oddly enthusiastic about the picture. Kendrick said it’s “the first time I’ve ever run to watch footage.”

“I think it says a lot about this epidemic of happiness this movie can spread,” said Timberlake, before moderator Chris Hardwick ran over and gave him a hug.

Kendrick also joked about how working with Timberlake on the songs made the whole experience of production feel like she was acting in some kind of meta-movie aside from the actual “Trolls” film.

“I felt like I was in one of those movies about musicians and [Timberlake] was the guy pushing the button like, ‘Do it better,'” Kendrick joked. “‘You know we’re recording, right?'”