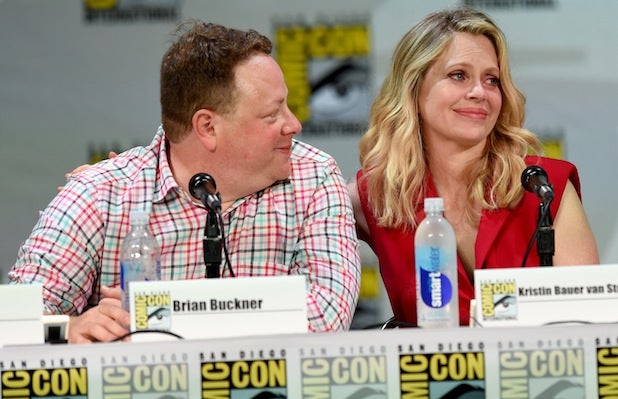 The ongoing war continued between the Republicans and HBO’s “True Blood” during its San Diego Comic-Con panel on Saturday when star Kristen Bauer van Straten commented on comments made by Palin about the show.

It all revolves around last week’s episode in which the supernatural drama shot up an event in honor of Sen. Ted Cruz, which included referring to the guests as “assholes.” It also gave Pam a high-haired and sequin dress makeover that had her exclaiming, “Oh my God, I’m a Republicunt.”

Ted Cruz weighed in, calling the episode “misogynist and profanity-ridden.” Palin then came forward and said that HBO had asked her to do a cameo. According to a channel spokesperson, they did extend the invitation to Palin via a representative but didn’t hear back.

What did van Straten have to say about that? “She’ll weigh in on anything,” the actress said during the panel.

The animal rights activist remembers Palin for her pro-hunting stance and referred to her as the “wolf-killer lady.”

She continued, “It’s sweet many many years later that I’ve made her angry, I had fun doing it.”