Donald Trump threw a verbal punch at Fox News Saturday, calling the network that helped get him elected president “stupid” for booking liberal comedian Bill Maher, who said the network backed out of talks for him to appear on one of their shows when he balked at “only talking about the things we agree on.”

Why Trump’s swipe at Maher? Well, apparently Maher’s remark that Ron DeSantis would make a better president than Donald Trump has gotten under the skin of the former POTUS… and the “Real Time” host is loving it.

On Friday’s “Real Time With Bill Maher,” the host-comedian said that the Florida governor who has modeled his every move on Trump would be a better president than Trump because “he’s not certifiably insane.” 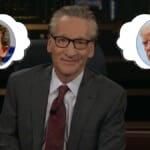 Also Read:
Bill Maher Argues Ron DeSantis Would Be a Better President Than Trump – Because ‘He’s Not Certifiably Insane’

“That’s a great one to start off with,” Maher told his audience. “You know what Ron DeSantis won’t be doing? He won’t be poop tweeting every day. He won’t be, like, having feuds with Bette Midler on Twitter!”

The day after that show aired, Trump said in a keynote address at the Faith & Freedom Coalition in Memphis, Tennessee, that Fox News was “stupid” for booking Maher as a guest.

“He’s a radical left maniac with modest television ratings,” Trump told the crowd. “And as soon as he says something that’s a little bit modest, or temperate, Fox and others put him on to explain – ‘oh look, Bill Maher, a lefty, Bill Maher is saying wonderful things.’” 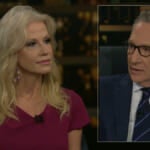 “They play right into the hand of the enemy, it’s amazing. I’m sure he laughs like hell at how stupid they are,” he continued. “They’re kissing the ass of the enemy. And in that case, his ass is not particularly pretty.”

Maher found that comment particularly amusing because, he said, there is no Fox News booking.

“Donald Trump says Fox News is ‘Kissing the ass of the enemy’ by booking me. He must have been ‘accidentally’ watching Real Time again,” Maher said in a Sunday tweet. “I know of no booking I have on Fox, but I’ve made clear I’d love to come on with [Sean] Hannity or [Tucker] Carlson, but they back out when I balk at ‘only talking about the things we agree on.’” 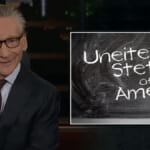 The beef between Trump and Maher goes way back. In 2013, Maher joked that he would donate $5 million to charity if Trump could prove he wasn’t the “the spawn of his mother having sex with an orangutan.”

“I hope it’s not true, but unless he comes up with proof … I’m willing to offer $5 million to Donald Trump that he can donate to a charity of his choice – Hair Club for Men; The Institute for Incorrigible Douche-bag-ery. Whatever charity,” mused Maher, who made the offer after Trump insisted on proof that Barack Obama was a U.S citizen.

Trump, in turn, filed a lawsuit for, yes, $5 million because he presented his birth certificate that listed Fred Trump as his father — not an orange-hued primate. 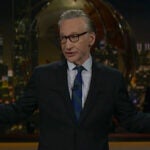