“They’re just punks. They’re just punks that don’t care about anybody but themselves and we know that’s always been the case, but this highlights it even at the highest level. Even on the biggest stage internationally, they’re behaving this way,” he fumed on “Morning Joe.”

Scarborough wasn’t just angry with Trump, Meadows and others in the administration, either. He had plenty of ire for those who planned the debate and didn’t test the participants appropriately. 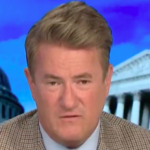 Trump and Meadows “went into the debate knowing he had tested positive for COVID and put everybody in danger,” he said, adding, “I have no idea why they allowed that guy to bluster his way in without giving him a test!”

The revealing excerpt of “The Chief’s Chief,” out Dec. 7, was published in the Guardian Wednesday. In the book, per the Guardian, Meadows wrote that though both candidates were required “to test negative for the virus within 72 hours of the start time” of the Sept. 29, 2020 debate, “Nothing was going to stop [Trump] from going out there.” A second test, taken after the positive one, returned a negative result, the former chief of staff added. (Trump issued a statement Wednesday that read, “The story of me having COVID prior to, or during, the first debate is Fake News. In fact, a test revealed that I did not have COVID prior to the debate.”)

Three days after that debate, Trump was admitted to Walter Reed Medical Center and treated for COVID-19. Speculation swirled about whether he had been positive for the virus at the debate, as his infection had not been publicly known until just before his hospitalization.

Fox News’ Chris Wallace, who moderated the debate, revealed just hours before Trump’s hospitalization that the first family had refused to comply with the venue’s masking rules.

“Everybody that was in that hall had tested negative. The interesting thing, however, was that the Cleveland Clinic, which set up the safety rules, said that everybody in the hall — with the exception of the president, the vice president and myself — had to wear a mask,” he explained on “Fox & Friends.”