Fox News host Tucker Carlson went off on the New York Times for a guest essay written by a mother who shares her experience raising her two daughters in China… and praises the Communist country’s “firm hand” of guidance.

Heather Kaye, who wrote that she lived in China as a fashion designer for 16 years, titled the piece “China Helped Me Raise My American Kids, and They Turned out Fine” – which didn’t sit well with Carlson.

“If you long for a fascist government to parent your children, you’re clearly a sick person,” Carlson tweeted. 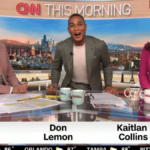 Carlson goes on to say in his mini-tirade Friday night that Kaye “misses the communist party of China co-parenting her children. She misses their ‘firm hand’ and we’re quoting. We’re not making this up.” He then read an excerpt from the essay to make his point:

“Our stringent government co-parent quickly made its presence felt. The girls’ Chinese kindergarten lectured us on everything, including how many hours our daughters should sleep, what they should eat, and their optimal weight.”

“The Communist Chinese Party.. fat-shamed this lady’s kids!” Carlson said before reading on.

“We sometimes felt as if our children were on loan to us for evenings and weekends, to be delivered back to school each weekday.”

“Now, again, she’s not writing a new version of ‘Darkness at Noon;'” he said, referring to a novel about a tried for treason. “She’s complementing the government of China.” 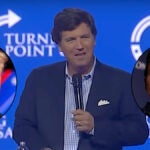 Also Read:
Tucker Carlson Dodges Question of Who He’d Support for President in 2024, Trump or DeSantis

He went on to quote the essay further:

“Ironically, the tight control of the Communist Party surveillance state results in its own kind of freedom: With crime and personal safety concerns virtually eliminated, our daughters were riding the subway unsupervised in a city of around 26 million people from the age of 11.”

Carlson quoted much of what Kaye wrote but did not quote the rest of it which sheds light on her perspective, with her writing, “A constant but benign (and mostly unarmed) police presence kept order; streets and the green spaces around every corner were kept immaculate, and the sense of civic pride was palpable.”

He never mentioned Kaye by name, but continued to tear into her.

“That is un-American. That person is sick, and if you don’t recognize how sick that person is, if you long for a fascist government to call your little girls fat, you’re a sick person, OK?” he said. “The fact that the New York Times would run that and expect all of its readers to applaud – ‘Oh if only the government would tell my kids they’re fat, this would be a better country.’” 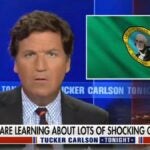 Also Read:
Tucker Carlson Claims Misinformation Can Be True (It Can’t) and That It’s a New Word (It’s Not) (Video)

Carlson concluded the two-minute rant by welcoming a guest and apologizing for losing his cool.

“I lost control and I want to apologize for that, but it’s true,” Carlson said while introducing his guest. “For the New York Times to run a piece from some totally – I don’t want to keep attacking her — some mom who wants the Communist Party to tell children they’re too fat, fat-shame her little girls and she gets off on it, and the New York Times readers applaud this like that’s normal. That is not normal. That’s not American. That’s demented.”

Watch the video above to see Carlson’s reaction to the New York Times guest essay.