Citing “unexpected circumstances,” The 1921 Tulsa Race Massacre Centennial Commission has canceled Remember + Rise, a live televised event scheduled for Monday, May 31 that would have featured appearances by John Legend and Stacey Abrams.

The commission announced the cancellation in a statement Thursday.

“Due to unexpected circumstances with entertainers and speakers, the Centennial Commission is unable to fulfill our high expectations for Monday afternoon’s commemoration event and has determined not to move forward with the event at this time. We have hopes to reschedule later in this 100th commemorative year,” the Commission said.

However, it is possible that there are other factors are at play besides “unexpected circumstances” with the event’s celebrity participants. Thursday, the Department of Homeland Security said the Tulsa Race Massacre commemoration event could be a target for white supremacists.

In a memo, DHS said that, although they haven’t seen any credible threats, “the current Homeland threat environment remains heightened.”

According to White House officials, President Biden will also be continuing with his June 1 visit. All other events related to the centennial will continue as scheduled, organizers say.

The Tulsa Race Massacre occurred in 1921 when a white mob, incited by false accusations of sexual assault against a Black teenage boy, rampaged in Tulsa’s Greenwood district from May 31 to June 1. The propserous neighborhood, famously nicknamed “Black Wall Street,” was burned to the ground, hundreds of residents were murdered and survivors ordered the survivors to leave. The event has been described as one of the most violent racial attacks in American history.

Until it was recreated on shows like “Watchmen” and “Lovecraft County,” the tragedy was largely unknown in popular culture outside of Oklahoma and even in the state it didn’t begin to be examined until the 1990s. Many historians believe that the story was actively suppressed in mainstream media as well as in the U.S. education system. 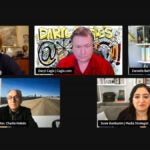